Robbrecht and Daem architects bring the Far East to Antwerp. With Zuiderhuis, the renowned Belgian firm launches its second project in the innovative city district Nieuw Zuid. With a very central location and eye-catching architecture, it is already an absolute triumph.

In previous issues of our magazine and on our website we already wrote about various projects of real estate developer Triple Living and their activities on Nieuw Zuid. Palazzo Verde by Stefano Boeri, Scheldehof by Max Dudler, Schelde 21 by Vincent Van Duysen, Parkzicht by Polo Architects or Zuiderplein by Atelier Kempe Thill. These are all sustainable, unique, innovative and stylish initiatives designed by some of the biggest names in the architecture world of today. They all contribute to the creation of a vibrant new part of the city, which is also car-free and therefore the perfect living and working environment. 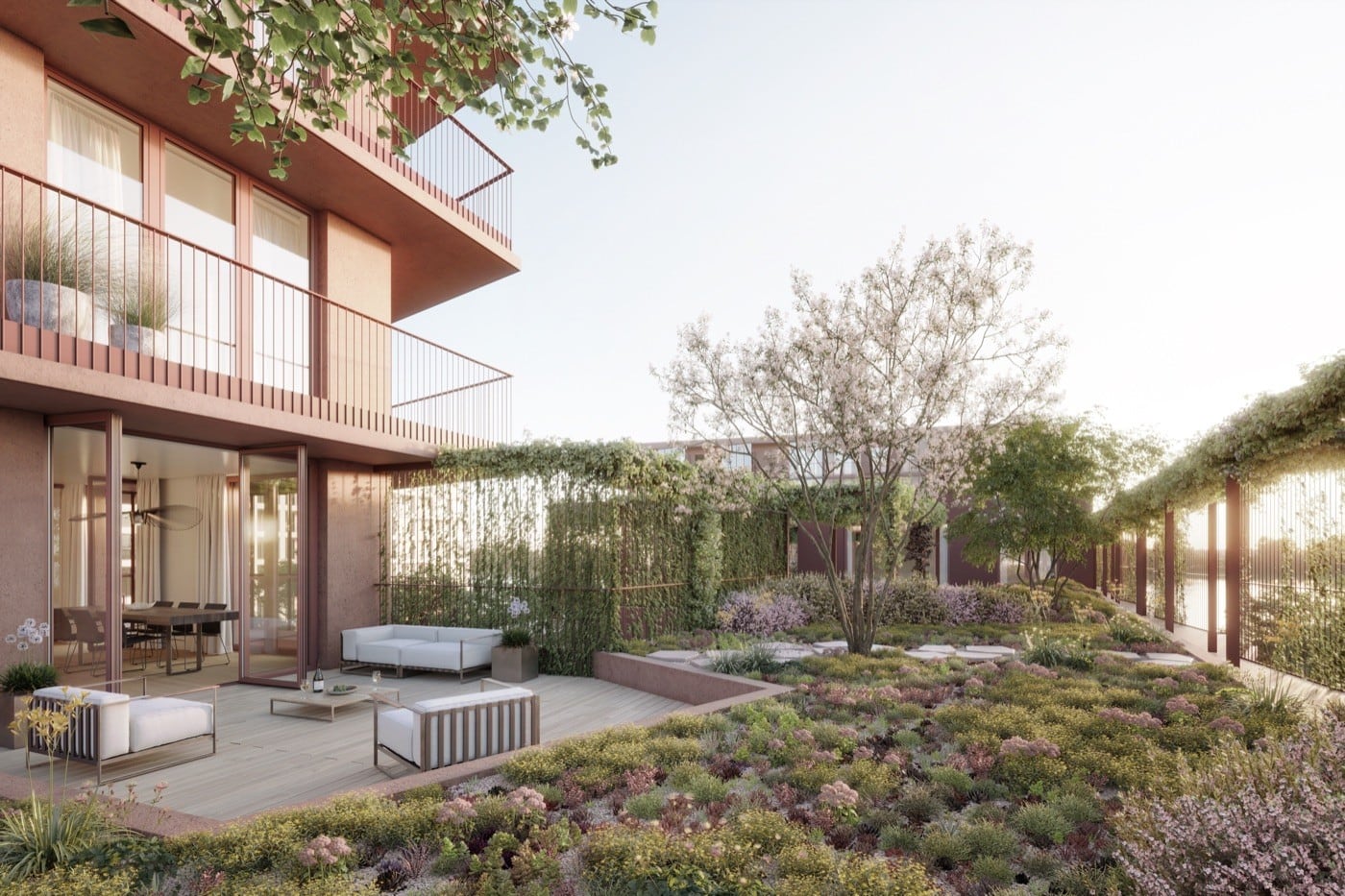 This new Antwerp city site has seen an enormous evolution in recent years and the nineteenth building project has just been unveiled. This is the second time that the creative talent of Robbrecht and Daem architects has been called upon. In 2016, they already completed Zuidertuin, one of the first buildings in the new district. With Zuiderhuis, Nieuw Zuid is officially halfway through its development into a fully-fledged city district.

Liveability and sustainability are key features and for (future) inhabitants it must feel like living in a park. Within the master plan of the renowned firm Secchi-Viganò from Milan, landscape architect Bas Smets was given enormous freedom to implement natural elements before the buildings definitively took their place here. This approach ultimately also has a positive influence on the architecture, because the designers can optimally respond to the beautiful views and ensure a connection with the surroundings. For example, the project we are highlighting here, Zuiderhuis, includes a spacious, stylised courtyard garden designed by Bas Smets and his team. Because of the column supports, the building seems to float, creating a connection with the street sides as well as with the quays and the Scheldt. Another aspect that shows how the architects were inspired by the location is the undulating façade with lots of glass that reflects the surroundings. This wink to the Scheldt stream has a fascinating effect. Architect Paul Robbrecht describes the unique façade as follows: ‘The folding of the façades, with a kaleidoscopic versatility, creates agility.’ You can also enjoy this special aspect inside, because the light enters in a playful way and gives the rooms extra life.

The undulating façade with a lot of glass reflects the surroundings and the nearby river Scheldt.

The innovative character of this development fits in perfectly with the line and character of Nieuw Zuid, which is already a trendy and progressive urban area. However, the dynamic façade also makes Zuiderhuis stand out. The use of colour and materials certainly contributes to this. In contrast to the elegant but more neutral tones of concrete, sober woodwork or soft natural materials that characterise some of the other buildings, what was chosen here was what is called ‘a warm explosion of different shades of red and terracotta tones’. Zuiderhuis' philosophy is therefore ‘Secured living in the city', something that is certainly encouraged by the architecture. The team of Robbrecht and Daem was inspired by the Far East, Indian temples and places like Fatih Pur Sikri. Here in the lively city of Antwerp, Zuiderhuis aims to create a warm, soothing cocoon where residents can escape the hustle and bustle without having to take much distance from the city centre. Here, all facets of city life are harmoniously united. 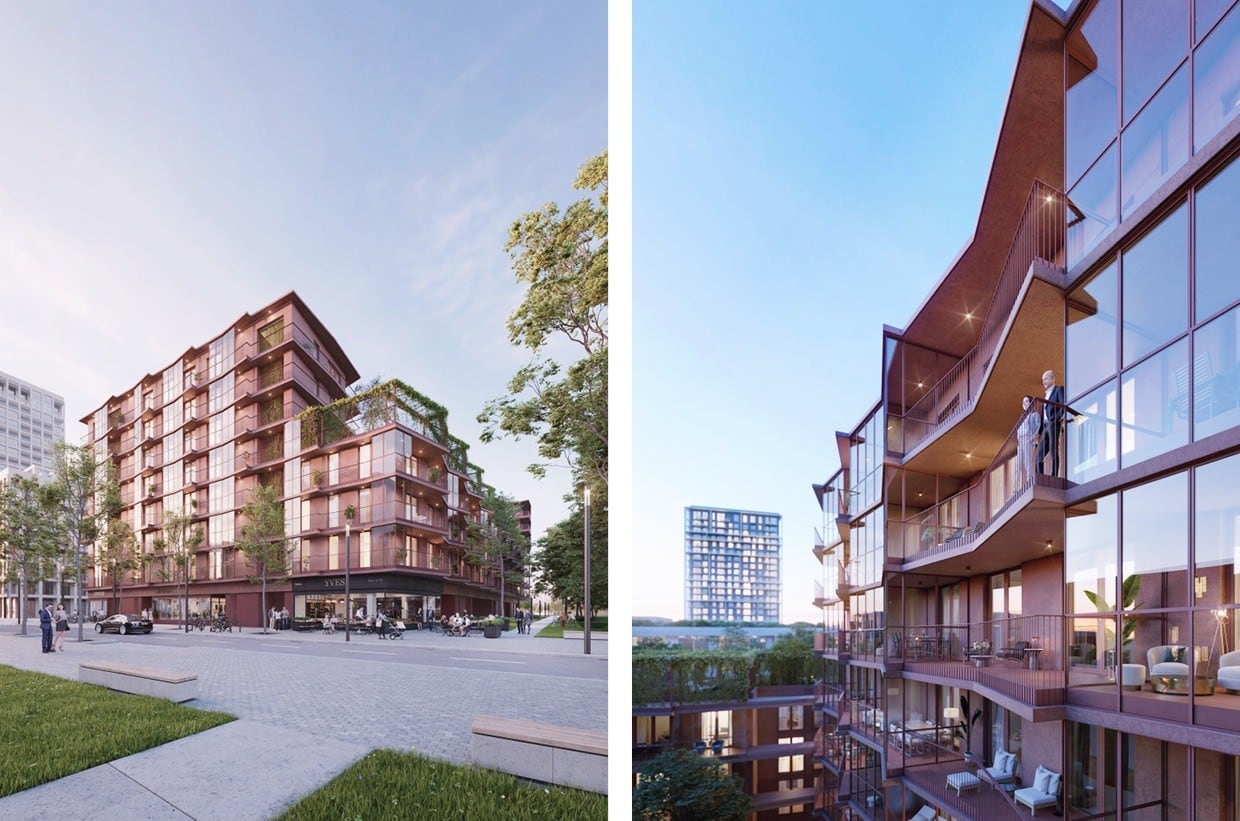 The project consists of thirty-eight apartments (including underground parking space) with terraces and winter gardens that provide extra light and space. ‘The building forms a small residential core in itself, with commercial spaces on the ground floor and a spacious courtyard garden,’ we hear from Triple Living, which started the first selling phase at the beginning of May. The foundation stone will be laid at the beginning of next year, keeping the property developer on course to complete the works on Nieuw Zuid by 2025. With all the residential projects that will also take their place on the site in the coming years, this will be a fully-fledged district with some two thousand apartments. An impressive initiative that we at Imagicasa will continue to follow closely!

You can read the full article on Zuiderhuis and Robbrecht en Daem architecten in our edition Imagicasa Summer 2020. You can still order it via our webshop.