The well-known and exclusive Balo DNA no longer flows only through the veins of ‘De Kempen’. After Mol, Hasselt in Limburg welcomed a branch of Balo Design Boutique in the summer of 2019, Imagicasa is eager to present this unique accessory store to our readers.

Bart Lodewyckx and his partner Lou Vanhees founded Balo Design Boutique, a business that born out of their passion. "Out of a passion for beautiful things and luxury," says Bart. "Lou and I shared this same love and we were constantly working on it. That's how the idea of getting Balo on track came about." A decision they both never regretted, says Bart. “It turned out to be a fantastic story that we started with just the two of us and in the meantime, we have grown to sixteen people, so that has grown nicely in ten years.” Their beautiful story was first translated into the Balo Design Boutique in Mol, where you can find an extensive range of furniture, decoration and exclusive furnishings. A range of all that is beautiful and luxurious. 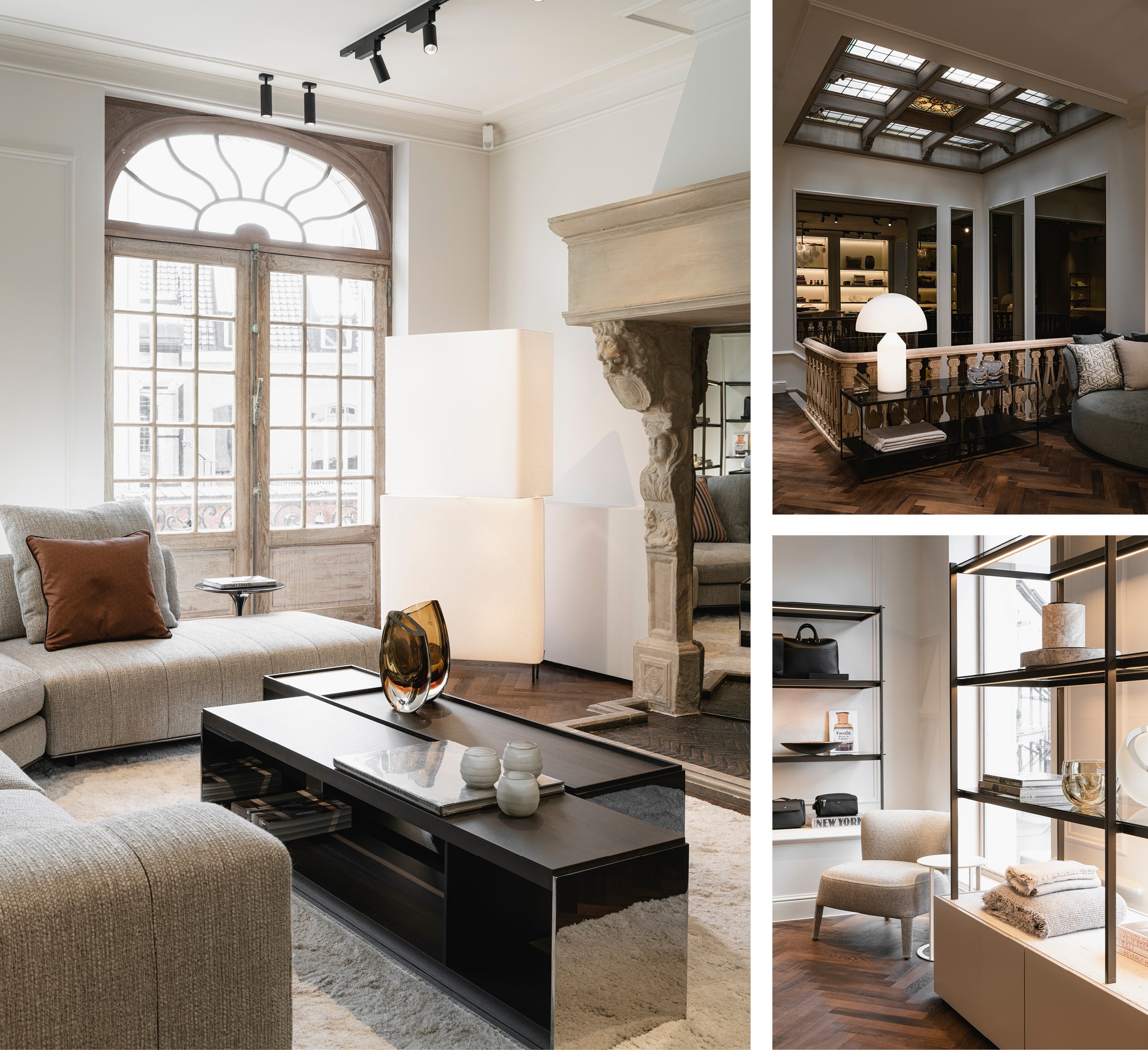 The Balo concept is really about personality and a personal approach. "Balo stands for coming home. When you visit our stores, you don't feel like you're entering a store, but it really feels like you're coming into a home," says Bart, and Imagicasa can definitely confirm this. We were immediately impressed by the beautiful establishment in Mol and since last summer, you can be immersed in the same homely, luxurious atmosphere in Hasselt.

Hasselt
Can a store as beautiful as the one in Mol, where Balo is housed in a former notary's house with high doors and ceilings that exude pure class, be matched with their second store in Limburg? Certainly! Also in the heart of Hasselt at the Maagdendries the Balo-DNA is clearly present. But why the second shop? "It was an opportunity to take the Balo-concept outside ‘De Kempen’," says Bart. He enthusiastically tells us about the beautiful, large carriage entrance and marble hallway of this impressive building in the middle of the city. The urban aspect was also great reason to open a second place here. "Not only did the building suit us perfectly, it was also a very good geographical location. We just seized the opportunity because with a business like Balo, you don't just have to look for a property. We really are a concept and then everything has to be right and with this shop and location it was right." Bart himself calls it a perfect building with Balo-DNA. "It had to run through the veins in the same way as it does in Mol." 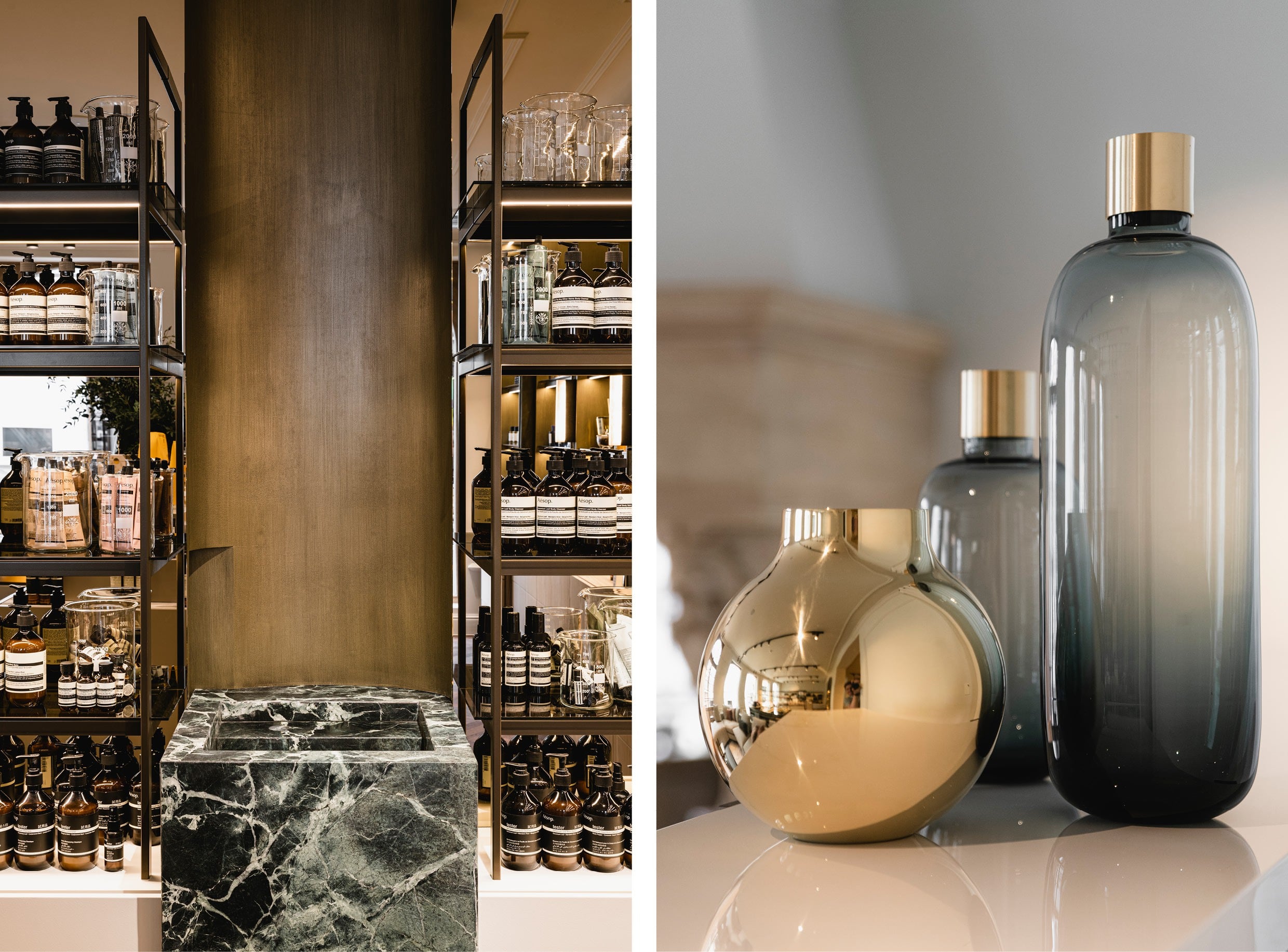 The concept and execution are the same in both stores: exclusive and accessible luxury. Only the focus is different. The shop in Mol is much larger and the focus is on projects. "Hasselt is a real shopping city, there is more traffic, more passage, more people coming in spontaneously. In Mol, customers come in with a real goal and plan to furnish a house. Mol remains our trusted flagship store for furnishing and furniture and the focus in Hasselt is more on decorative elements with the accessory store," explains Bart. He tells us that it's worth the distance, which we are all too happy to believe.

Bart and Lou have a surprising little extra in Hasselt which definitely makes it worth the distance: a bar. "The bar has been open to the public since September so everyone can come and have a drink. It's such a great concept, the people in Hasselt were very fond of it even before the opening and couldn't wait to come and have their coffee in the morning or a glass of wine in the afternoon," says Bart enthusiastically. It's like sitting in a chic hotel bar. A nice concept for anyone who comes shopping or passes by, but certainly for most men. "The men often have to go shopping over the weekend against their will. The women can put them in the bar with a nice glass of champagne or wine and then they can shop." A great idea according to Imagicasa! "The whole bar is also part of the Hasselt concept and shows once again how urban it is.” The bar is clearly a favourite of Bart's and will undoubtedly also appeal to the public – and not only men. 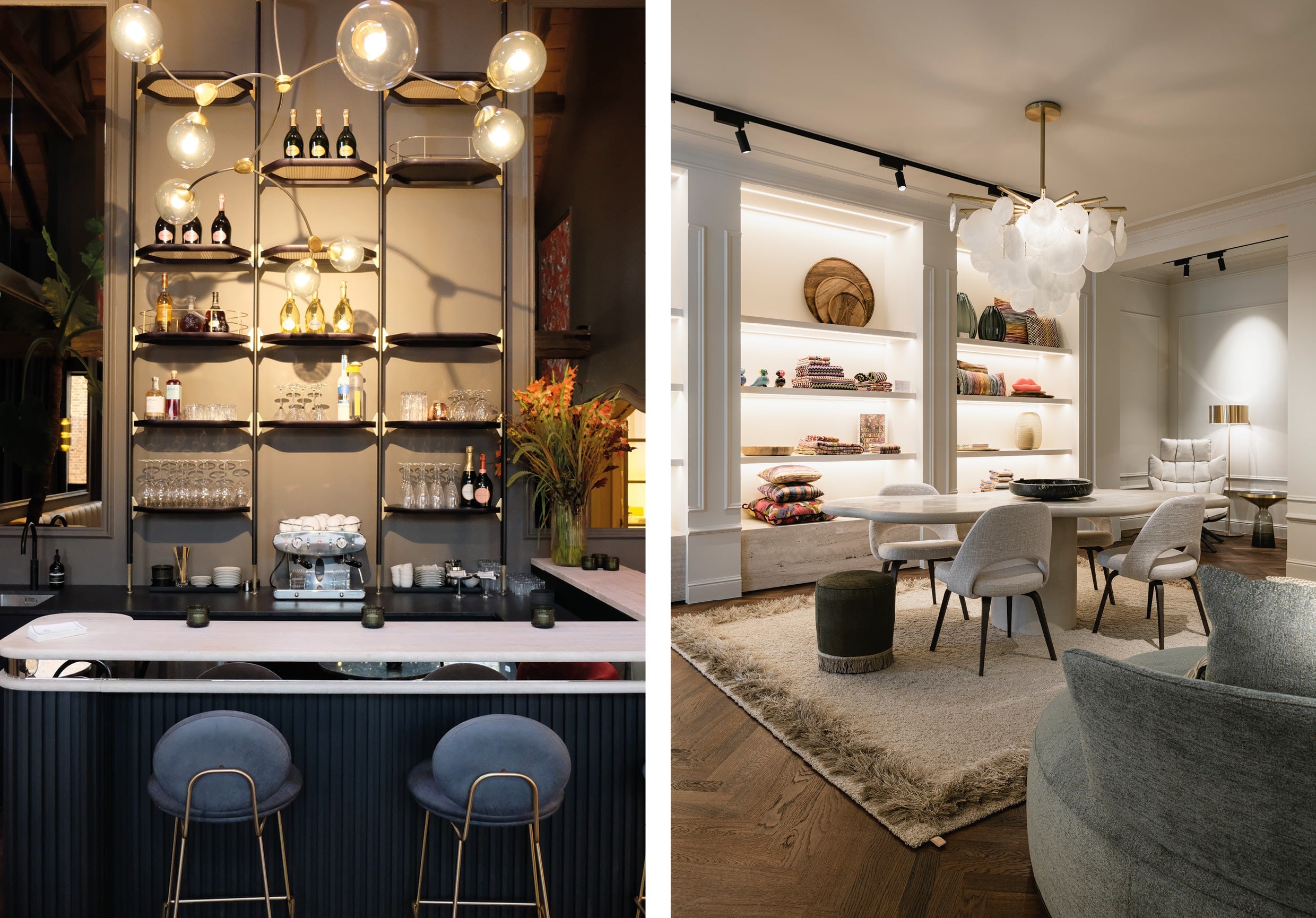 So what is Bart's own favourite brand or product that they sell? "That's really difficult. I don't really have a favourite. I support all the brands we sell. Of course, it's very nice that we are one of the three exclusive distributors of La Table D'Hermès products in Belgium, for example. You can't find that anywhere except in the Hermès stores themselves." Bart is of course very proud of this collaboration with this prestigious brand. "Also some other exclusive partners are happy to see their products in this concept.” The ultimate proof of their prestigious reputation. We wouldn't be able to choose one favourite from all that beauty ourselves. Everything is of such a high level and they have something for everyone. The manager mentions the Montblanc products, including pens and briefcases, as a popular product aimed at men. The Diptyque range, a French cosmetics company, appeals more to women. This is also distributed exclusively in Hasselt. 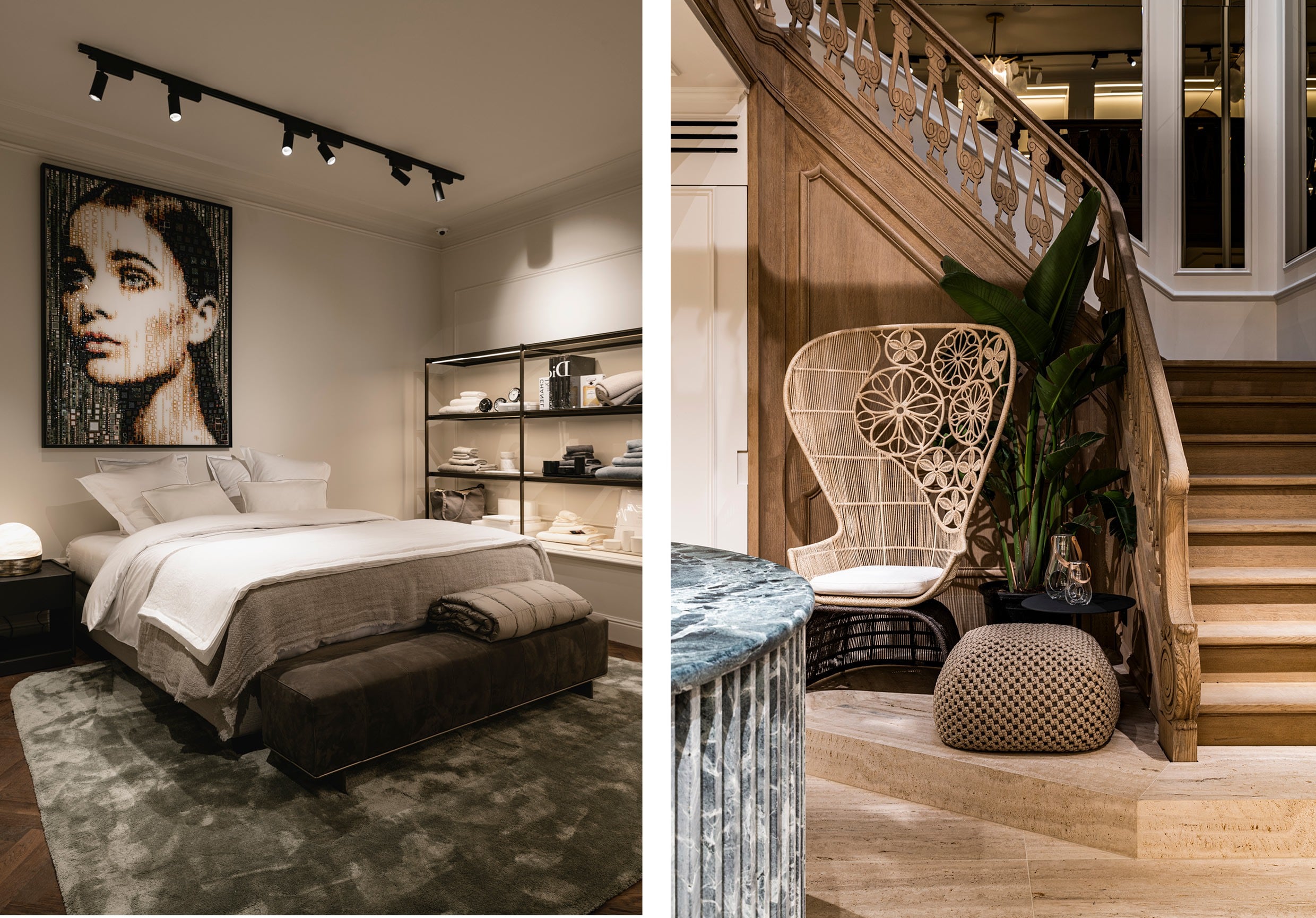 We ask the ‘Kempenaar’ if he notices certain trends in the choice of products people are buying and asking for at the moment. "Trends are always difficult to predict. What I do notice is that more and more people are really opting for quality and luxury brands again. We can already see that in Hasselt. It's the same again as about thirty or forty years ago. People choose quality. There was a time when everyone bought popular and cheaper items, and they were almost thrown at your head," he laughs. "Those were mass-produced items where, with the little you paid, you actually still paid too much for what it is. Now they're investing in luxury again. Customers want a nice plate to eat a piece of cake on on Sunday. Table D'Hermès and Christofle, a real classic manufacturer of tableware, are trending. People prefer to pay a decent amount for silver cutlery, rather than paying less for lesser products. I can feel that and I absolutely support it!"

Imagicasa can already predict that the boutique in Hasselt will be as successful as the Balo Design Boutique in Mol. But could there ever be a third store, we wonder? Who knows maybe abroad, since the designers also regularly carry out projects elsewhere. Even now, Bart has projects running both nationally and internationally. "Never say never. I can't comment on that, if there's an opportunity to do so... you never know."

Balo is a beautiful design boutique in Mol founded by partners Lou Vanhees and Bart Lodewyckx. Imagicasa went to visit this beautiful shop and was immediately impressed by the extensive range and the beautiful and unique interior. It is not just a showroom with pieces of furniture. Each part of the shop is fully furnished. Through sophisticated presentations and setups, which are more like a real home than a shop setup, you get acquainted with discrete luxury and with their vision on beauty and attention to detail.