We may not be able to go on holiday to Sweden this summer, but that doesn't mean we can’t put the country in the spotlight. In the winter edition 2019 of Imagicasa magazine we published an extensive article about some of Sweden's top designers from the 20th century. Now, for three weeks in a row, we will share these designs on our website as well because even today they are still very inspiring.

Scandinavian design is everywhere. And no, we’re not talking about that one Ikea bookcase that can be found in pretty much every home, but rather about Swedish designers such as Josef Frank, Yngve Ekström and Greta M. Grossman. Vintage was once just seen as modern design and was first introduced to the world by these names in the 30s, 40s and 50s. Whether it’s a genuine vintage piece, a reproduction of an iconic design or 21st-century furniture with an obvious wink to the past, you can’t see past them. Maybe you even own such a beautiful chair, table or sofa but just don’t know the history of it. That is why Imagicasa is happy to present to you a few 20th-century designers who have quite the significant influence on the interiors of today. 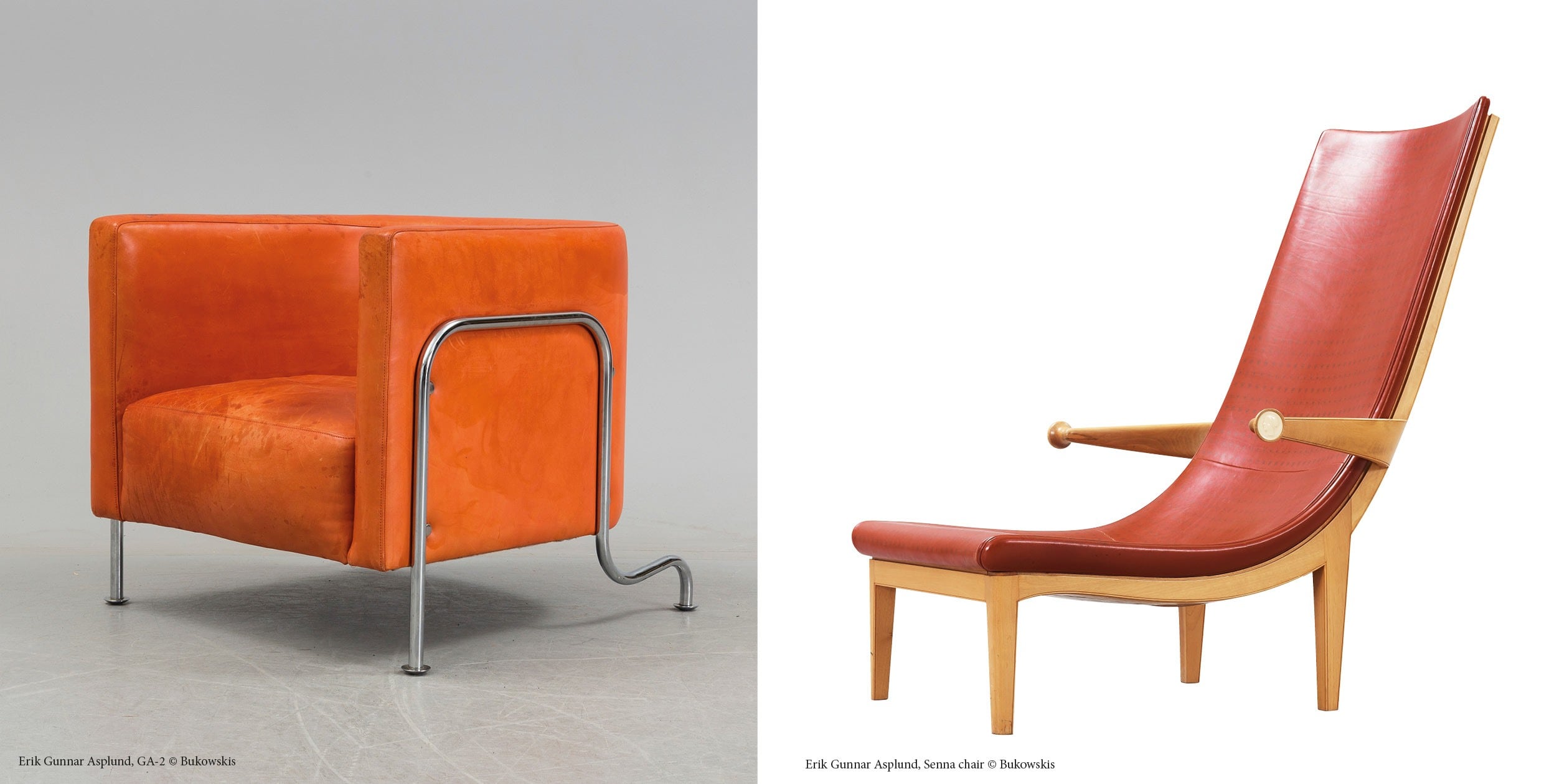 Erik Gunnar Asplund (1885-1940)
The first designer we want to highlight is sometimes called the "godfather of Functionalism”, being one of the first to fully embrace this style movement. But let’s start at the beginning: Asplund started his creative career studying painting in the early 20th century at the Royal Institute of Art in Stockholm. However, his interests went beyond this discipline, which led him to study architecture at the Royal Institute of Technology and eventually set up his own studio in 1913. During the last years of his life Asplund returned to his alma mater where he taught a new generation of architects.

The earliest designs by Gunnar Asplund – some sources also address him by his full name: Erik Gunnar Asplund – represent what is known as the 'Swedish Grace' style. A rather short-lived, but not unimportant style movement. It is characterised by elegant shapes, geometric simplicity, refined details and antique motifs. Buildings such as the Skandia cinema and Stockholm city library – definite must-sees when visiting the Swedish capital – are clearly Neo-Classical and were inspired by what the designer encountered on his travels to Greece and Italy. The best-known piece of furniture he designed during this period of his life was the elegant 'Senna' chair. 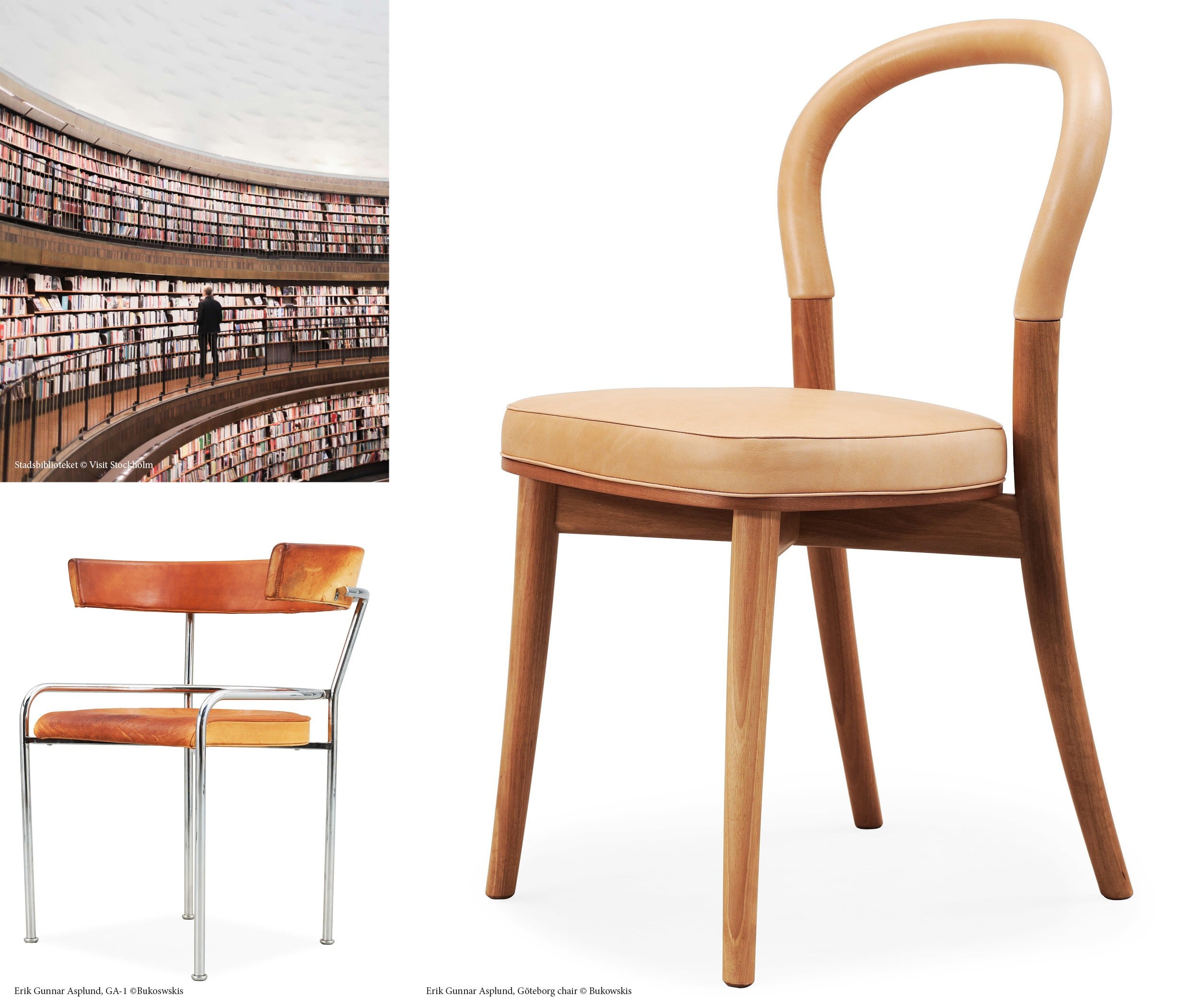 Later, however, Gunnar Asplund's style evolved into Functionalism, with an aesthetic based on the social democratic ideals of the time and optimism for the future. An event of great importance to this style movement and in which this designer was closely involved was Stockholmsutställningen or the Stockholm Exhibition in 1930. Asplund was responsible for the Paradise Cafe and the Entry Pavilion, which were built with large expanses of glass and had a large frame of exposed steel.

Gunnar Asplund’s sudden preference for the use of steel also translates in his furniture designs because – as he wrote down in a Modernist manifesto – there was “no longer any need for old cultural forms”. In the 1930s he designed the iconic 'GA-2' chair (for Nordiska Kompaniet and Källemo) and the 'Karmstol' chair, as well as the simple, wooden 'Gothenburg' chair (for Cassina). 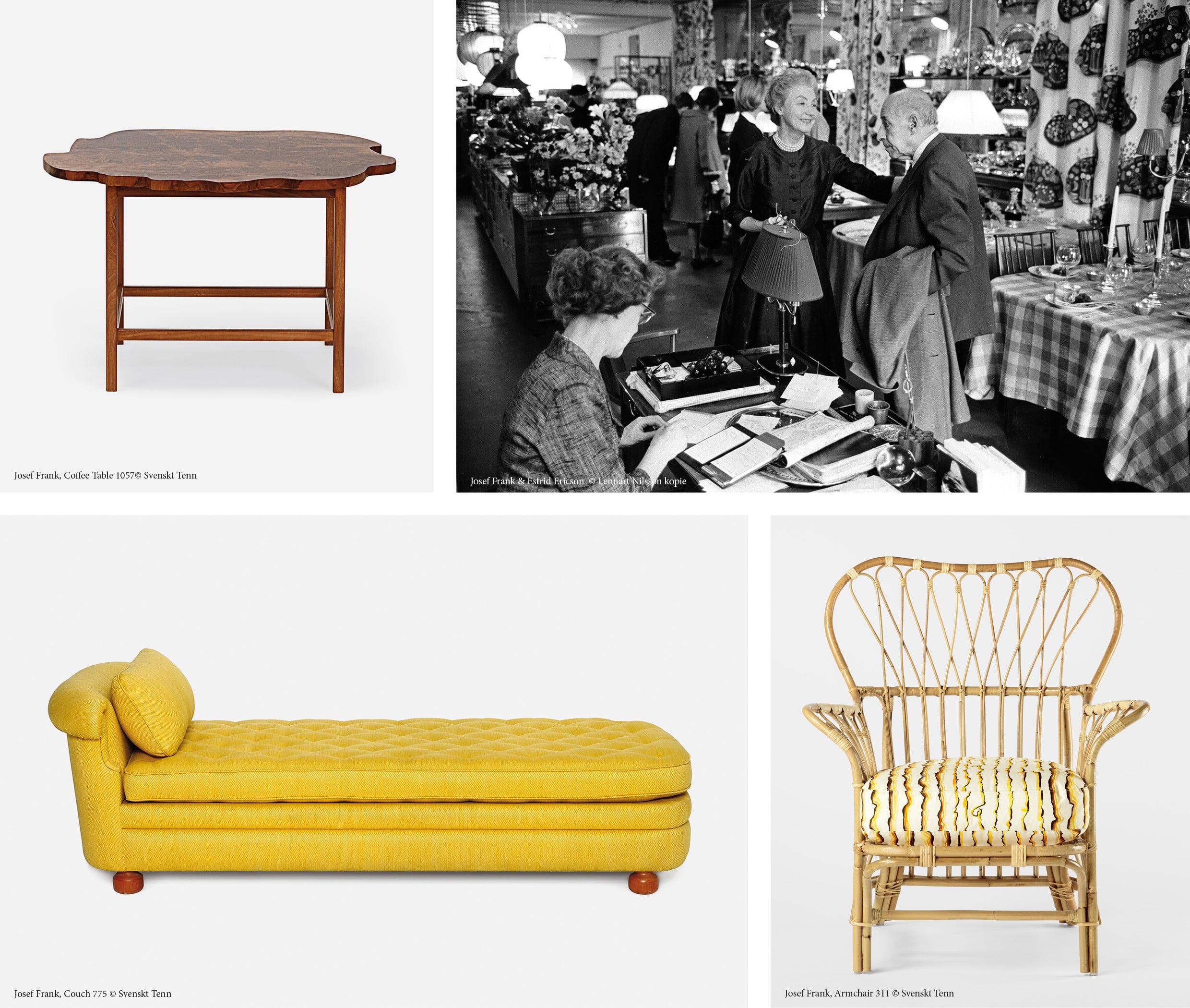 Josef Frank (1885-1967)
This man may not have been born in Sweden, but he did end up being of great importance to the country and is still regarded as one of Sweden's most important designers. Frank fled Austria – here, he was mainly active as an architect – in 1933, which had become increasingly anti-Semitic by that time and began a successful career as a designer in Stockholm for the interior design store Svenskt Tenn. Together with founder Estrid Ericson, he made Svenskt Tenn the leading company in modern and sophisticated interiors in the mid-20th century. The Frank-Ericson duo also received a great deal of international attention thanks to their presence at the 1937 World Exhibitions in Paris and 1939 in New York.

Colour, cosiness and comfort were the key elements in Frank's designs. With this, he deliberately turned his back on the pragmatism and functionalism that some of his contemporaries and architects such as Le Corbusier represented. "The monochrome surface appears uneasy, while prints are calming and the observer is unwillingly influenced by an underlying slow approach," said Josef Frank. His aim was to incite the viewer with a sense of freedom. His prints are therefore often inspired by the plant world and nature’s colours and forms. You’ll recognise tulips, forget-me-nots, crocuses, hyacinths, etc., but also fantasised flowers that should make even small spaces permanently interesting and make them feel less stifling. This is also the reason why he wanted his furniture to ‘breathe’, in other words: chairs with open backs and raised cabinets with legs so you could still see the floor and wall, making the room feel less small or cramped.

Svenskt Tenn still produces prints and furniture designed by Josef Frank, but also more modern brands respond to the recurring popularity of playful and colourful fabrics, emphasising the designer’s influence to this day. 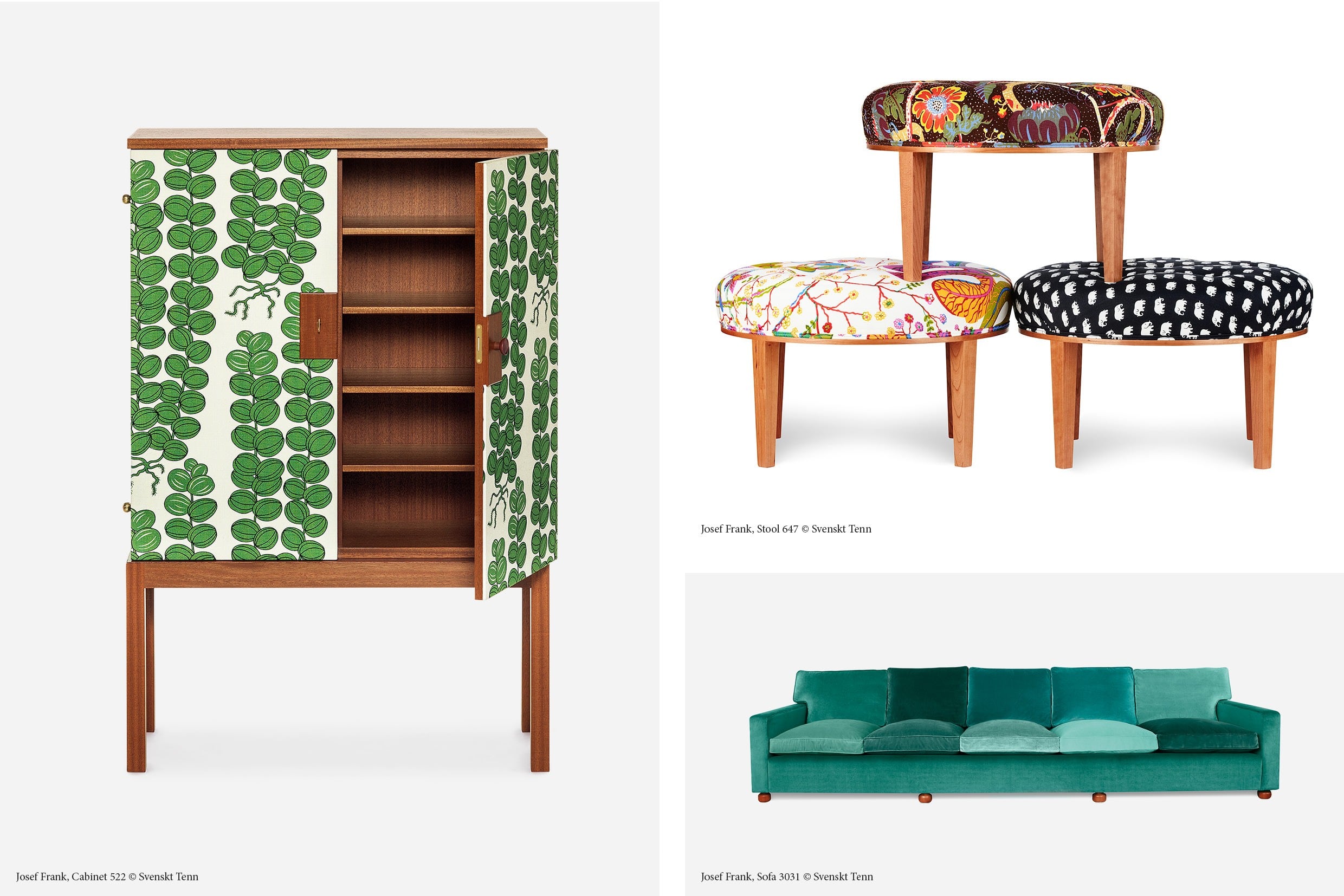 Axel Einar Hjorth (1888-1959)
The Swedish design culture became an international concept from the 1920s onwards. Architect and industrial engineer Axel Einar Hjorth played an important role in this, although his name is much less well-known than those of his colleagues. Hjorth may have never completed his university studies at the Technical School in Stockholm, which now goes by the name ‘Kunstfack’, but at the beginning of his career he was able to work for various furniture companies. The designer wasn’t lacking in ideas and ambition. His aim was to present the great talent in the decorative arts that his home country possessed to the whole world. An exhibition at the Metropolitan Museum in New York in 1927 proved crucial in introducing Swedish design and architecture to the United States. In the following years, he would also present his work during the World Exhibitions in Barcelona (1929), Chicago (1933), Brussels (1935) and Paris (1937), making himself a household name in the international community. 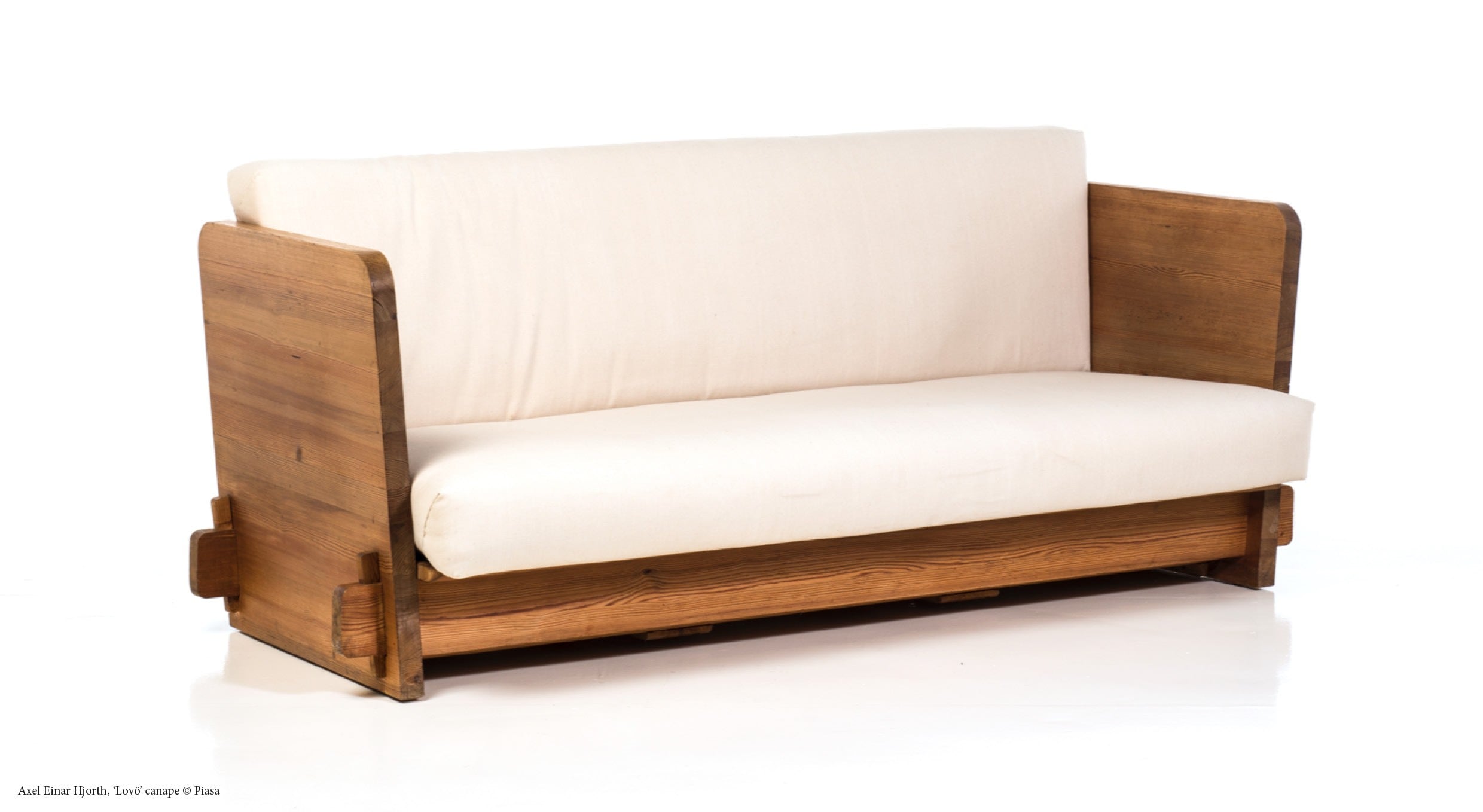 For more than ten years, Axel Einar Hjorth worked as an architect, interior designer and furniture designer for the leading department store Nordiska Kompaniet. With his unique style, which originates in the romantic nationalist ‘Swedish Grace’ movement, he sets himself apart from many of his contemporaries. Playful ornaments, bright colours, combinations of exotic woods and references to other historical styles such as the French Art Deco regularly recur in Hjorth’s designs. The 'Utö' sofa, 'Caesar' cupboard and the 'Lovö' armchair are just a few of his outstanding creation. They balance between Neoclassical and Functionalist, luxurious and minimalistic.

Axel Einar Hjorth is seen more as a forerunner of Swedish Modernism and does not really have a sounding name today – he had no heirs, nor did he leave behind an archive of his life and work. Yet we regularly see his pieces popping up more and more; for example in the interiors of one of our favourite designers, Pierre Yovanovitch.

Keep an eye on our website and social media for the next part, in which we will discuss the work of Carl Malmsten and Greta M. Grossman. 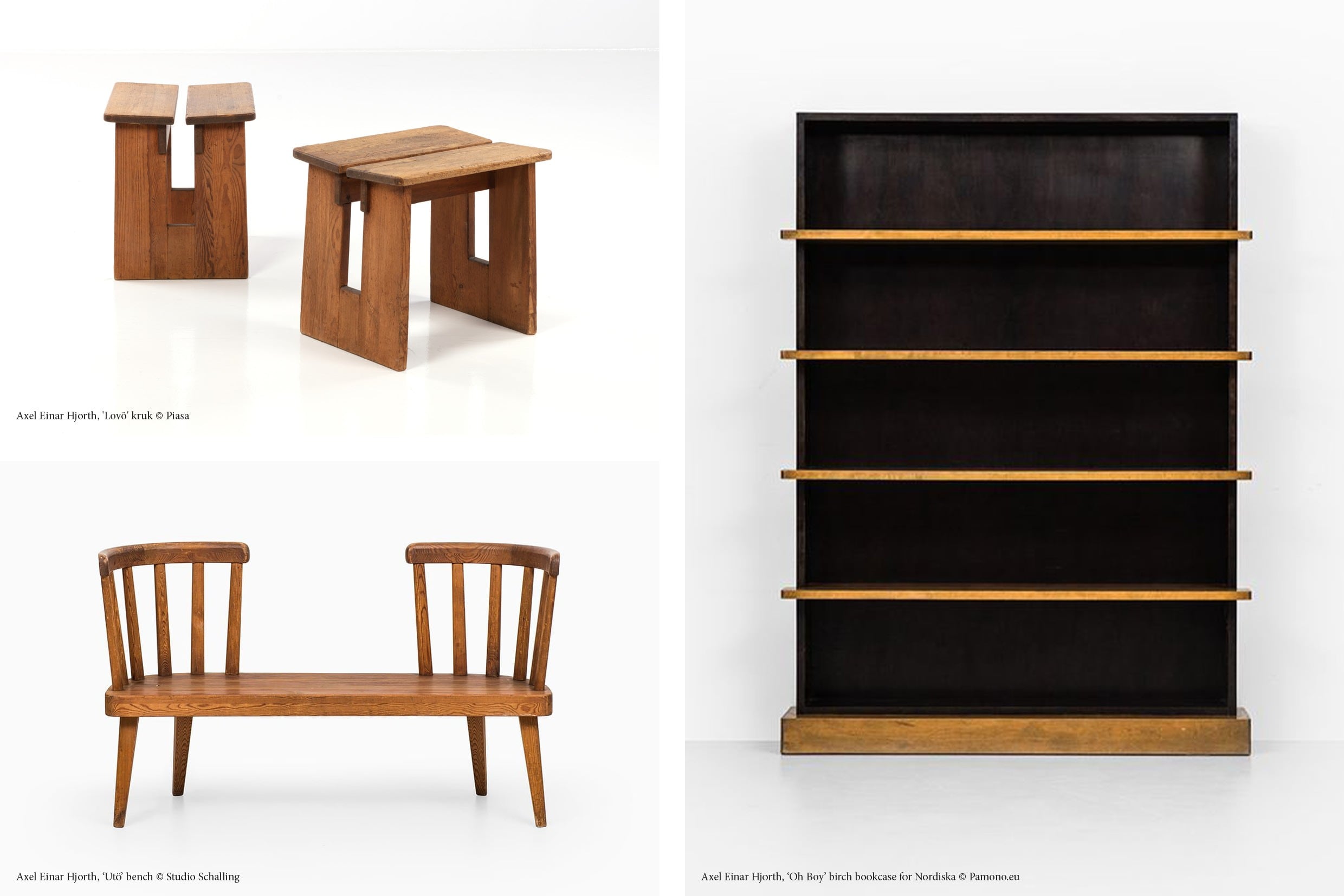