Swedish designers in the spotlight: Acking, Jakobsson and Ekström

We may not be able to go on holiday to Sweden this summer, but that doesn't mean we shouldn't put the country in the spotlight. In the winter edition 2019 of Imagicasa magazine we published an extensive article about some of Sweden's top designers from the 20th century. Now we would like to share their designs three weeks in a row that are still very inspiring (part 3/3).

Vintage was once just seen as modern design and was first introduced to the world by these names in the 30s, 40s and 50s. Whether it’s a genuine vintage piece, a reproduction of an iconic design or 21st-century furniture with an obvious wink to the past, you can’t see past them. Maybe you even own such a beautiful chair, table or sofa but just don’t know the history of it. That is why Imagicasa is happy to present to you a few 20th-century designers who have quite the significant influence on the interiors of today (read part 1 and part 2 to discover more about some other important designers and their creations). 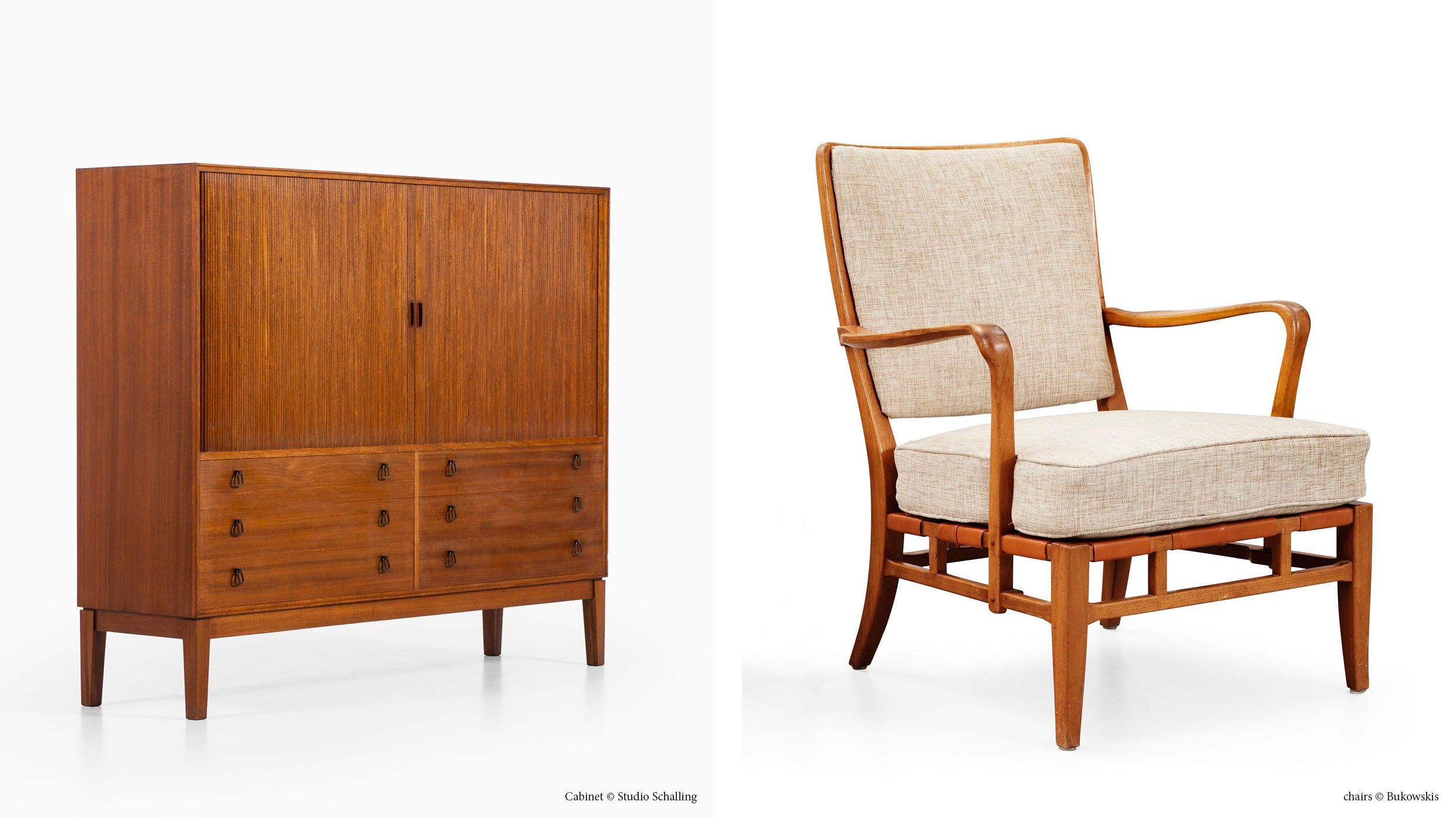 Carl-Axel Acking (1910-2001)
Like many others in this overview, Carl-Axel Acking was both a furniture designer and an architect. In both positions he has made important contributions to the world of design, and he has even ventured into designing textiles and lighting. It started with his studies at Konstfack and the Kungliga Tekniska Högskola, also known as the Royal Institute of Technology in Stockholm. In the meantime, he already got the opportunity to assist Gunnar Asplund in the design of Gothenburg's town hall. In 1939 he finally founded his own architectural firm together with Sven Hesselgren.

The ‘Tokyo’ chair is the epitome of Scandinavian Modernism 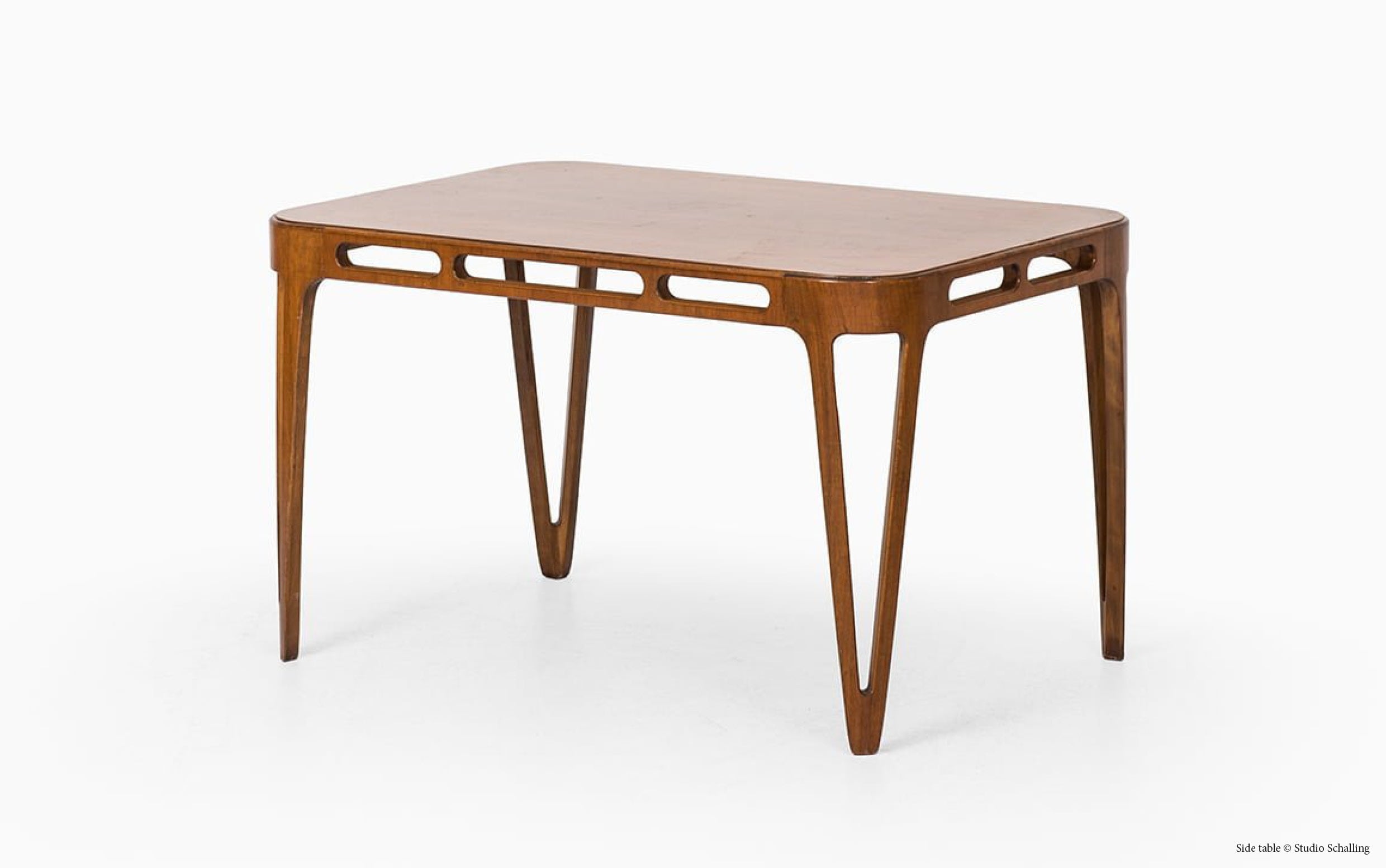 In the 1940s and 1950s, Acking also made a name for himself as a designer of seating and storage pieces for renowned companies such as Nordiska Kompaniet. His best-known creations are the 'Anette' dressing table, the 'Trienna' chair – named after the Milan Triennial – and the 'Tokyo' chair. The latter Acking designed for the Swedish embassy in Japan. With its elegant, organic form, seemingly floating seat and made of wood, the chair is the epitome of Scandinavian Modernism. In 1952, Carl-Axel Acking even won the Lunning Prize which rewarded important representatives (on a national and international level) of Scandinavian design. His designs can still be found in many museums and are to this day regularly auctioned at vintage design furniture.

In addition, a lot of Acking's buildings also still exist. As an architect he designed both residential and public projects. The best known are the Siris Chapel in the town of Torsby, the Hässelby Family Hotel in Stockholm, the Birgitta Church in Skön and the Skånska bank building in Malmö. The highlight of his career was perhaps designing one of the three H55 pavilions. These were built by Acking and two other architects as part of the 1955 international exhibition in Helsingborg. Acking was also a respected professor at various schools and universities in Sweden and was a member of several architectural associations.

Yngve Ekström (1913-1988)
Yngve Ekström entered the world of design at a very young age. His father died when Ekström was only three years old but passed on his passion for furniture and woodworking to the next generation. Ekström was only thirteen years old when he started working for Sweden's oldest chair manufacturer, Hagafors Stolfabrik, which was conveniently located in his hometown. Here, he was able to develop a wide range of skills. At the age of eighteen, the talented Swede began to take more serious steps towards a professional career as a designer. He took lessons in drawing, painting, sculpture and is said to have been a frequent visitor of the Röhsska Museet, a museum of decorative and applied arts in Göteborg.

Timeless furniture within the Modernist ideals of simplicity and functionality

In 1945 Yngve Ekström founded ESE-Möbler together with his brother Jerker and their good friend Sven Bertil Sjöqvist. After Sjöqvist's departure a few years later, the name changed to Swedese. The aim of the company – which still exists today after seventy years and remains true to its original philosophy under the current owners – was to design timeless furniture within the Modernist ideals of simplicity and functionality. The first design that truly put Swedese on the map was the 'Thema' chair from 1953. It was flat-packed, making transport easier, and had to be assembled by the buyer himself. This was even a few years before Ikea would introduce this system and became world-famous with it. Even the iconic hex key that comes along with every piece of furniture as the only tool you need to put it together would have been an idea of Jerker Ekström.

Yngve Ekström is often mentioned in the list of other Scandinavian celebrities whose name and creations already during their lives could count on a great international prestige. Just think of the Danes Arne Jacobsen and Poul Kjaerholm and the Fin Alvar Aalto. Ekström's most famous design is the 'Lamino' chair from 1956. Readers of the Swedish magazine Sköna Hem even voted it 'Swedish Furniture of the Century' in 1999 and we don't see the design out of place in our own interior, even in the 21st century.

Hans-Agne Jakobsson (1919-2009)
This last designer in our list is the most modern of them all and was mainly active in the 1950s to 70s, when the style movement Scandinavian Design truly reached its ‘golden age’. To this day, Jakobsson is most remembered for his exquisite lighting fixtures. Although the more industrially tinted wall and ceiling lamps and the curved pine veneer pendants are clear remnants of the 60s and 70s, some designs look surprisingly contemporary. Also his – sometimes very colourful – fringed lamps radiate this retro vibe, but at the same time would not be out of place in a luxurious, 21st-century modern interior. 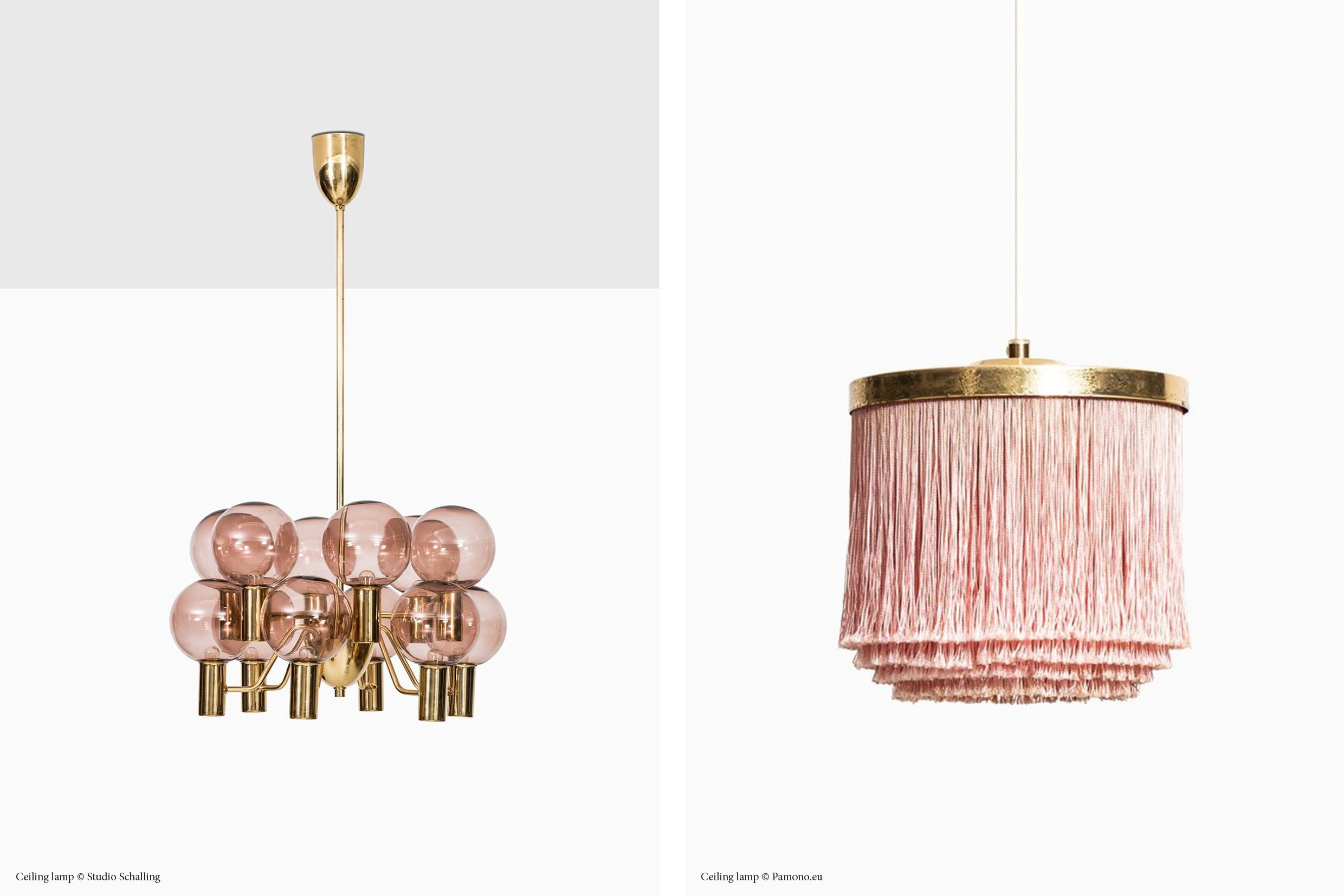 Hans-Agne Jakobsson imposed no restrictions on himself in terms of materials (iron, glass, fabric, wood,…) and shapes and he was also honoured for his comprehensive knowledge of light effects. He managed to manipulate it in such a way that the light was much softer and glare-free. The organic style of his creations is not only the result of Jakobsson's predilection for flowing designs and elegant ornaments but was also inspired by the work of the Dane Poul Hennigsen and the Fin Alvar Aalto.

Prior to his career as a designer, Jakobsson, who had studied and graduated with a degree in architecture in Göteborg, worked at General Motors as an industrial designer. Later he also worked as an assistant to Carl Malmsten and the Fin Werner West (1890-1959). In 1951, Jakobsson founded his own furniture company called Hans-Agne Jakobsson AB in the southern town of Markaryd. This is also simply referred to as AB Markaryd. In fifty years' time, the company would design more than two thousand lamps. One of them, called the 'Laminated Pine Pendant', became an international success and a similar model was even picked up by furniture multinational Ikea, who went on to literally sell it all over the world. 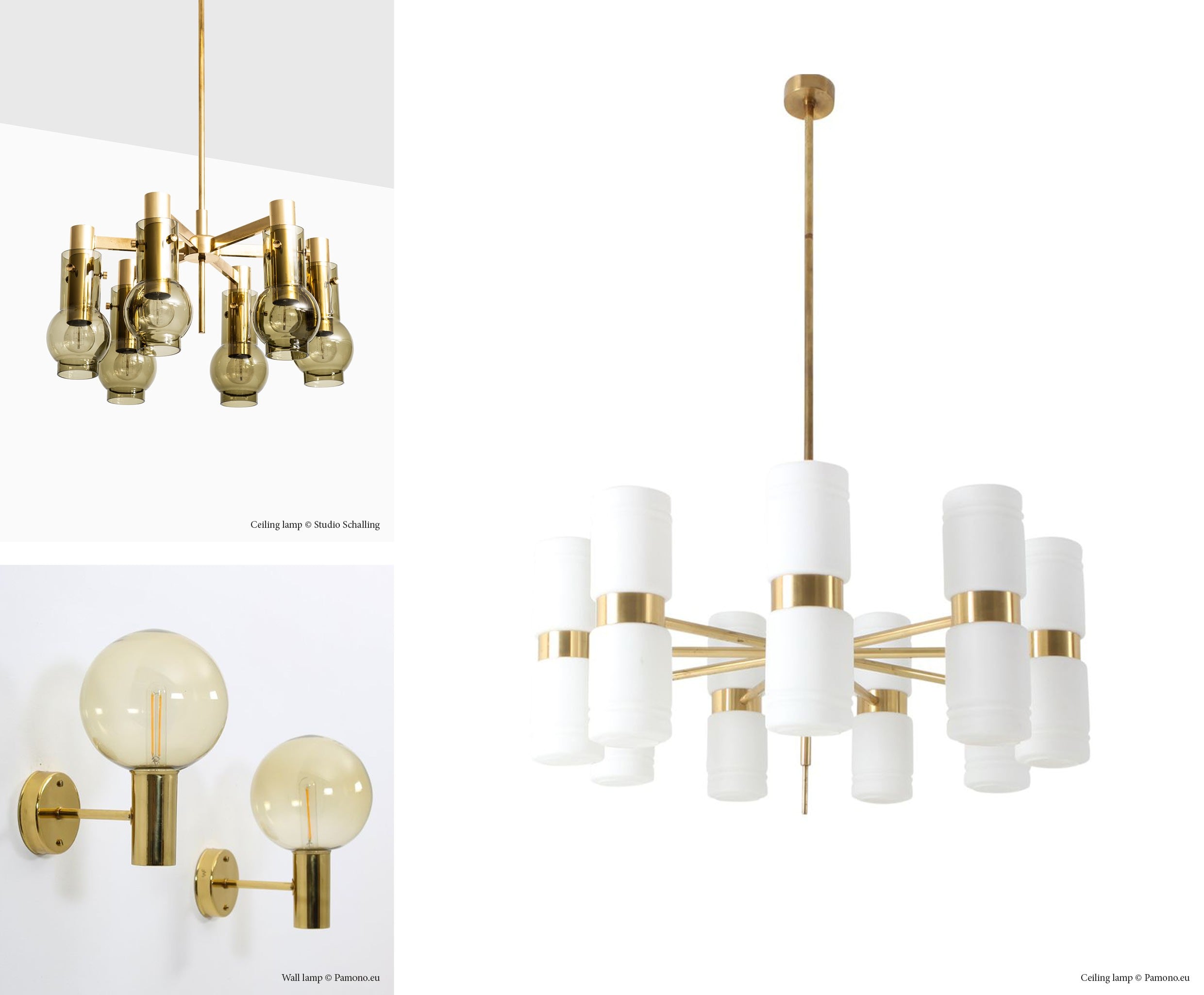