An architectural icon designed in the 1970s by French architect Emile Sala is now given a new lease of life by a Belgian couple and an art collector who have returned from California. 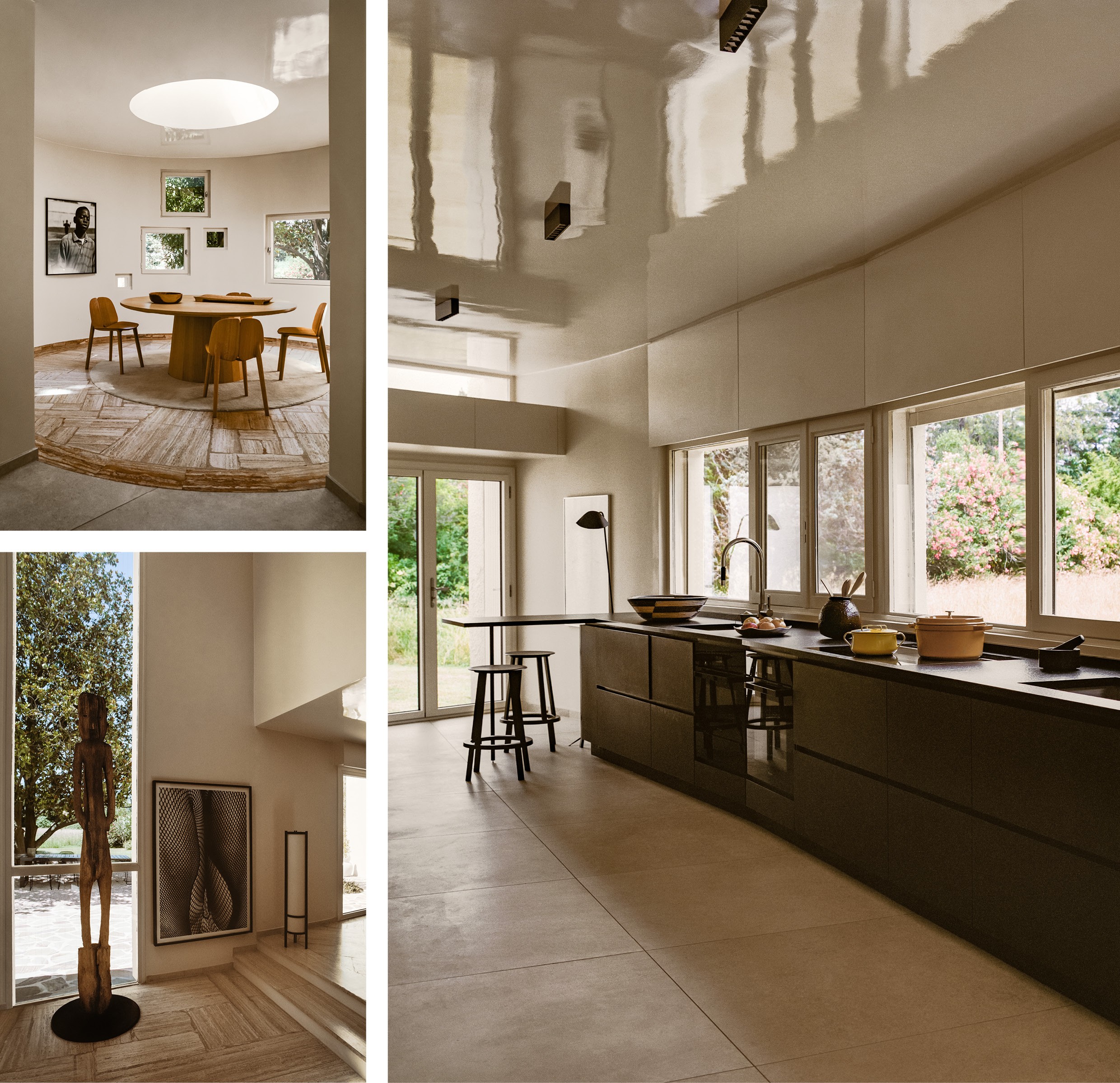 Anne and François Moret never stop living new adventures between uprooting and rooting. After having lived in Brussels, Buenos Aires, Barcelona and Silver Lake, the couple has taken an umpteenth turn and has been spending their time between Paris and Arles since 2020. ‘We wanted to find a place that would bring the family together. One of our close French friends told us about the sale of this incredible modernist house that had been left in its original state since it was built. We fell in love immediately, despite the prospect of a complete renovation. The building, listed as a twentieth century heritage site, reminded us of the American architects of the 1950s, and more particularly Frank Lloyd Wright,’ says François Moret cheerfully.

Commissioned by the Bank family in 1972, who had the extreme audacity to want a very original, even avant-garde house for a region that was rather traditionalist in those years, the Villa Bank, built with total freedom of expression by the architect Emile Sala (1913-1998), opens up to nature, unlike the dark Provençal mas. While the soul and character of this breathtaking building have been preserved by the new occupants in order to enjoy a true historical experience, its metamorphosis is anchored in the present. ‘Not wanting to make the seventies sacred, nor to reuse the original materials and colours such as cork, carpet on the walls and the ever-present orange or brown tones, we collaborated with interior designer Jean-Claude Perucca and the best craftsmen in the region to bring this gem up to date, without erasing the original architecture,’ explains Anne Moret. The interior walls were smoothed before being painted in off-white, a deliberately light colour, as were the original rough travertine floors. There are almost no sharp angles to disturb the view; the only things that stand out are the fluid movements, the balance of proportions, the exaltation of light, the ellipses and the rounded movements. The curve of the tower, caught between wide and dynamic walls, softens the vertical tension of the building, offering an enveloping, reassuring and intimate sensation. 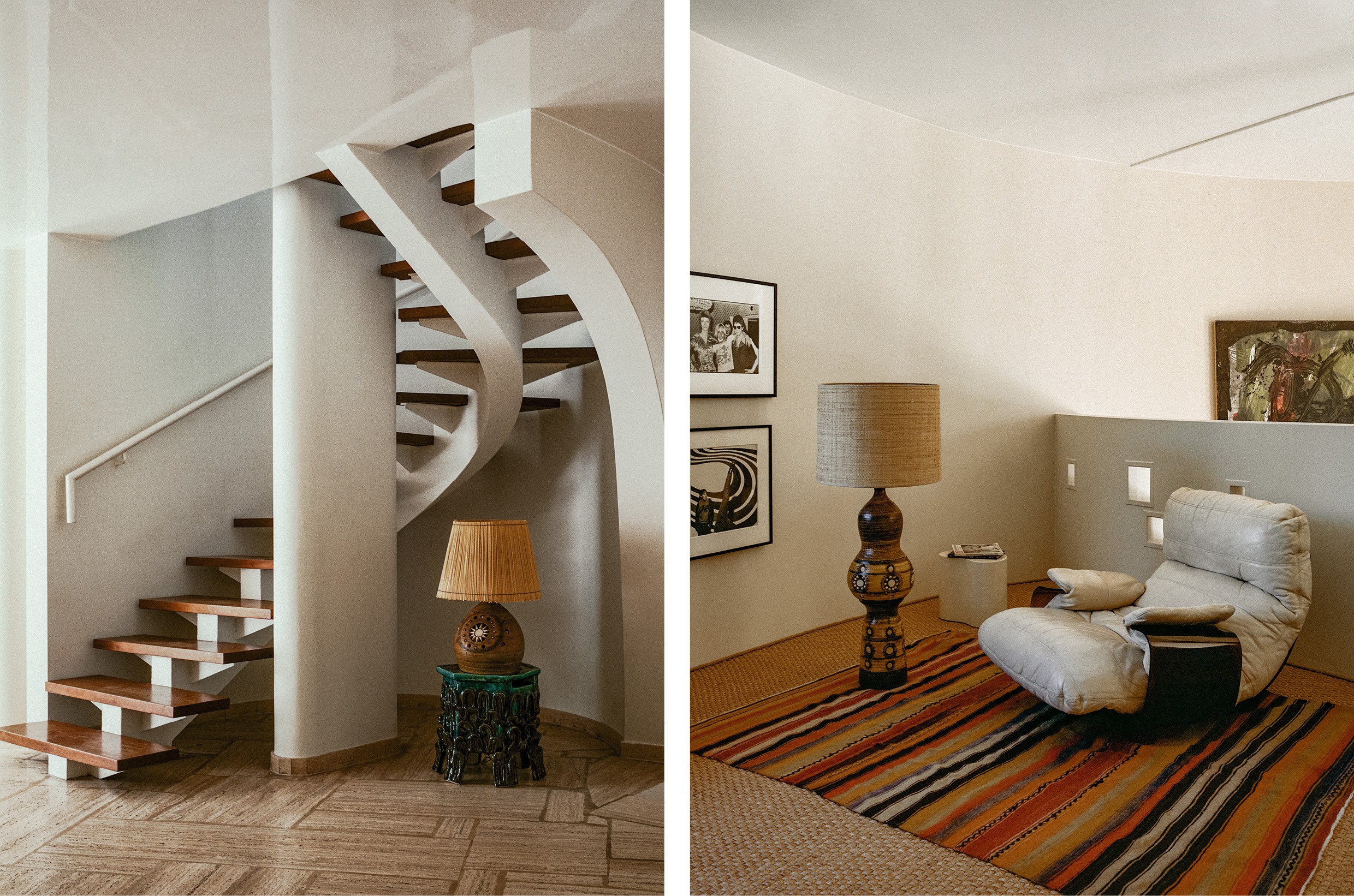 The masterly brass fireplace designed at the time by the sculptor Max Sauze, sets the atmosphere alight and is in itself one of the central elements of the house. A large number of works, objects and furniture by current and renowned artists represented by the famous Spazio Nobile gallery, punctuate the space. In the living room, a Sofà designed by Francesco Binfaré (Edra) and a large vintage leather and wood armchair found at Twentieth, a gallery in Los Angeles, surround an Œil-T22 coffee table by Pierre Chapo (1972) found at 50 Cinquante in L’isle-sur-la-Sorgue. In the circular dining room, topped by a natural light shaft, the round wooden table by Belgian cabinet maker and designer Kaspar Hamacher (unique model for Spazio Nobile) is surrounded by Osso chairs by Erwan & Ronan Bouroullec (Edition Mattiazzi). 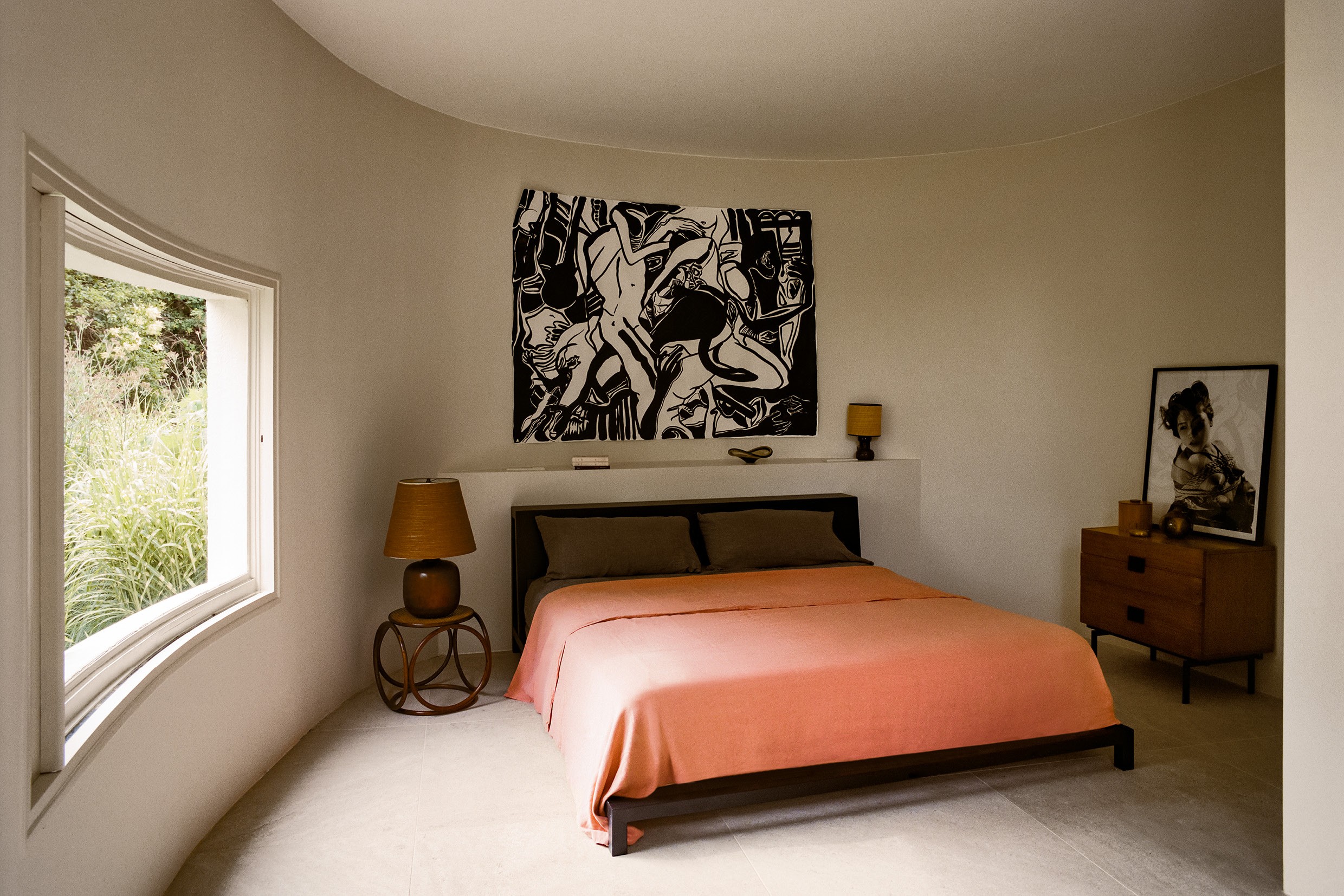 On the mezzanine of the first floor landing, a Marsala armchair in milky leather by Michel Ducaroy for Ligne Roset is in dialogue with a floor lamp by Georges Pelletier and photographs by Autumn de Wilde and Mick Rock. In the intimate cocoon of the master suite, an Indian ink by the Parisian artist Elena Simon seems to be watching over the bed covered with a salmon linen sheet (The Conrad Shop), the Thonet wooden stool as a bedside table and a photograph by Viviane Sassen placed on a chest of drawers by the Dutch designer Cees Braakman, bought in a Brussels auction room. The soft lines and squared openings on the outside that change with the hours are a constant call to nature. Hidden at the end of a path where reeds and ferns sway, this resolutely human-sized residence has reinvented itself in a marvelous recomposed past.

Do you want to know more about Villa Bank? Read the full article in Imagicasa Autumn 2022.