In the historic heart of Antwerp, this early 19th-century residence, characterized by an unprecedentedly large monochrome graphic facade, has been thoroughly renovated. Although the original house radiated a certain charm and was well laid out, the rooms still felt dark and did not fit together in a harmonious whole. 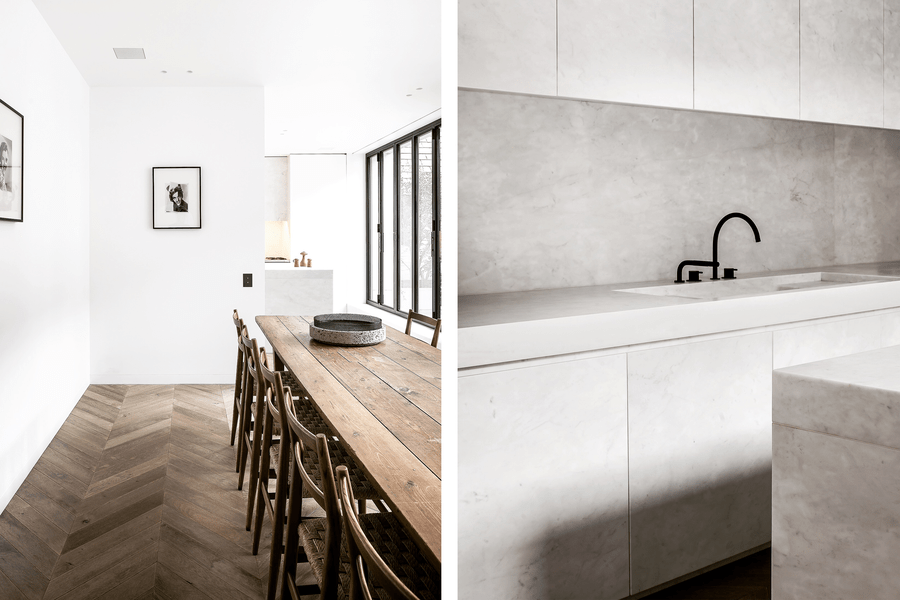 That's why architect Nicolas Schuybroek spent a lot of time on the architectural part of the house: reinventing volumes, letting spaces merge into each other and, most importantly, letting natural light flow into the house. Schuybroek's aim was to create a timeless, warm-minimalist and elegant house that was connected to its past and to the needs of its owners.

"The monastic appearance of the house is perfectly complemented by the rough textures."

This warm-minimalism is also characteristic of Schuybroek's work. The search for timeless minimalism and clear simplicity is central to his projects, as well as his fondness for raw and tactile materials. The essence of his work is about designing serene and pure spaces that still feel warm and authentic. Although his work is usually described as minimalist, it is surprisingly elegant and always contains a soul.

This characteristic, subdued elegance is also clearly visible throughout this building, where clear simplicity became the central thread throughout the project: the reinvention of a certain kind of minimalism and refinement in which light, volume and properties would be as important as the refined interior details and materials. Throughout the house, the lines flow seamlessly into each other, which ensures an absolute tranquillity. The monastic appearance of the house is perfectly complemented by the rough textures: the wooden beamed ceiling, the chevron oak floors, the soft white marble and a carefully selected selection of mid-century furniture.