A mix of bold geometrics and British Modernism

In the heart of White City in London is the Television Centre, the former home of the BBC. British design studio Waldo Works revealed the bold and contemporary design for the largest penthouse in this complex, and Imagicasa was already allowed to look inside this impressive abode.

The gigantic penthouse runs over two floors at the top and has no less than four bedrooms, four bathrooms and four outdoor spaces including a terrace of over 90 m2. It's been decorated with the most exclusive furniture and works of art. The design of this apartment is inspired by bold geometry and British Modernism. "The design of this penthouse in the Television Centre was inspired by the site's fantastic history and exciting architecture by Graham Dawbarn of Norman & Dawbarn," says Tom Bartlett, founder of Waldo Works, about the project. 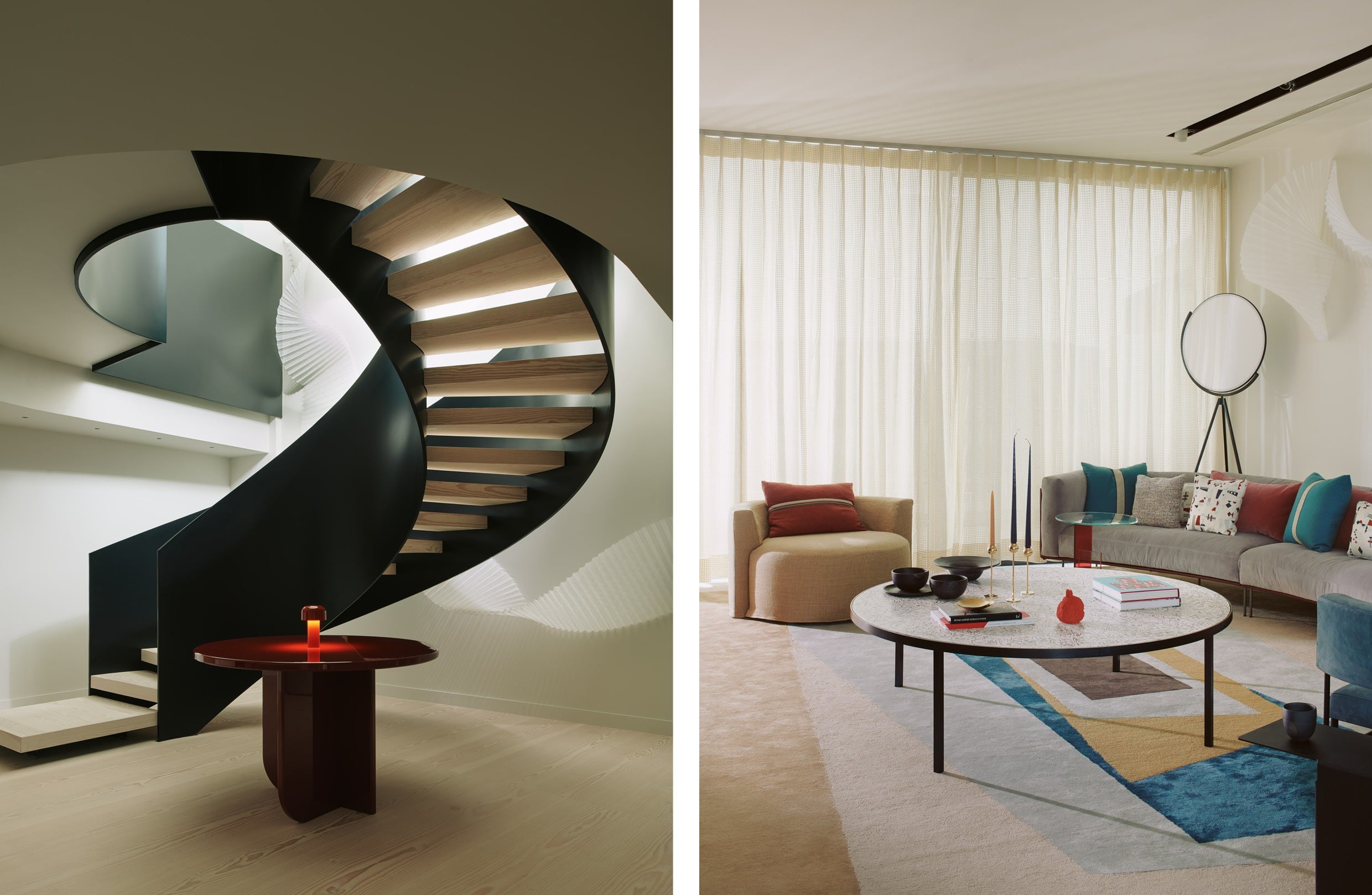 Waldo Works reveals the design for the penthouse in the Television Centre in London.

Waldo Works' designs are known for the mix and celebration of old and new. Their contemporary take on British design is known around the world. With a focus on the architecture of the broadcast towers, the shapes of sound waves and the pixelation of earlier television images, they playfully brought those layouts, patterns and textures into the apartment. Throughout the penthouse, there is a predominant palette of beige and black with some colour accents in cushions, furniture, art and carpets. 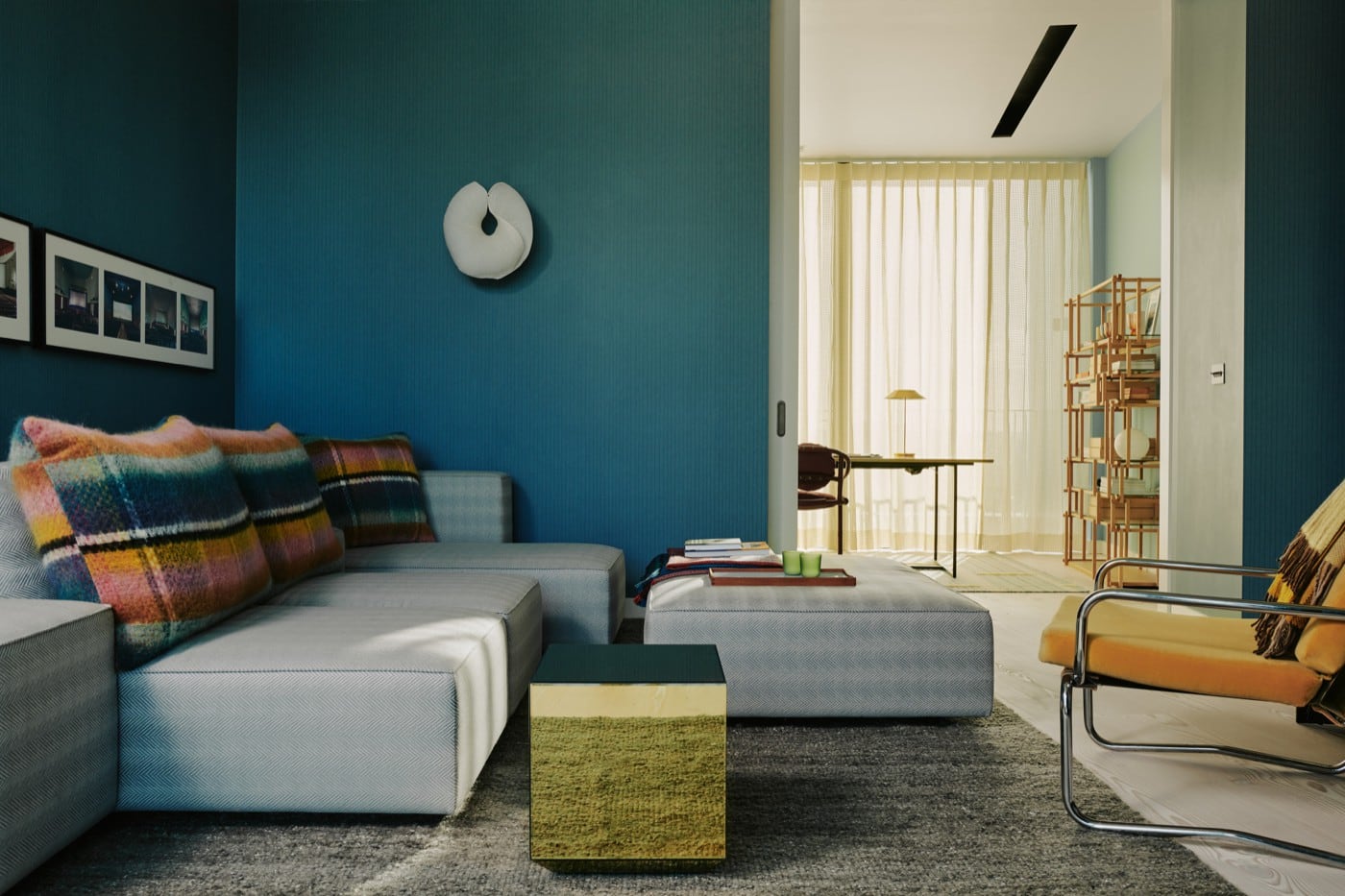 The extravagance starts right from the moment you enter. In the entrance hall you stumble upon an imposing black steel staircase as a centrepiece between which a paper sculpture specially designed by Deepa Panchamia rises. The work of art continues into the living room where a rounded 'Divani Rod Bean' sofa imitates the shape of the stairs and the building. The carpet with geometric shapes in the middle is by Annie Albers. The artistic decoration and choice of furniture was inspired by the colours and structures of the time when the BBC centre was conceived. It is a post-war, playful and cheerful kind of Modernism. We find pieces by Living Divani, Glas Italia, Herrenhuis and also designs by Waldo Works, themselves. 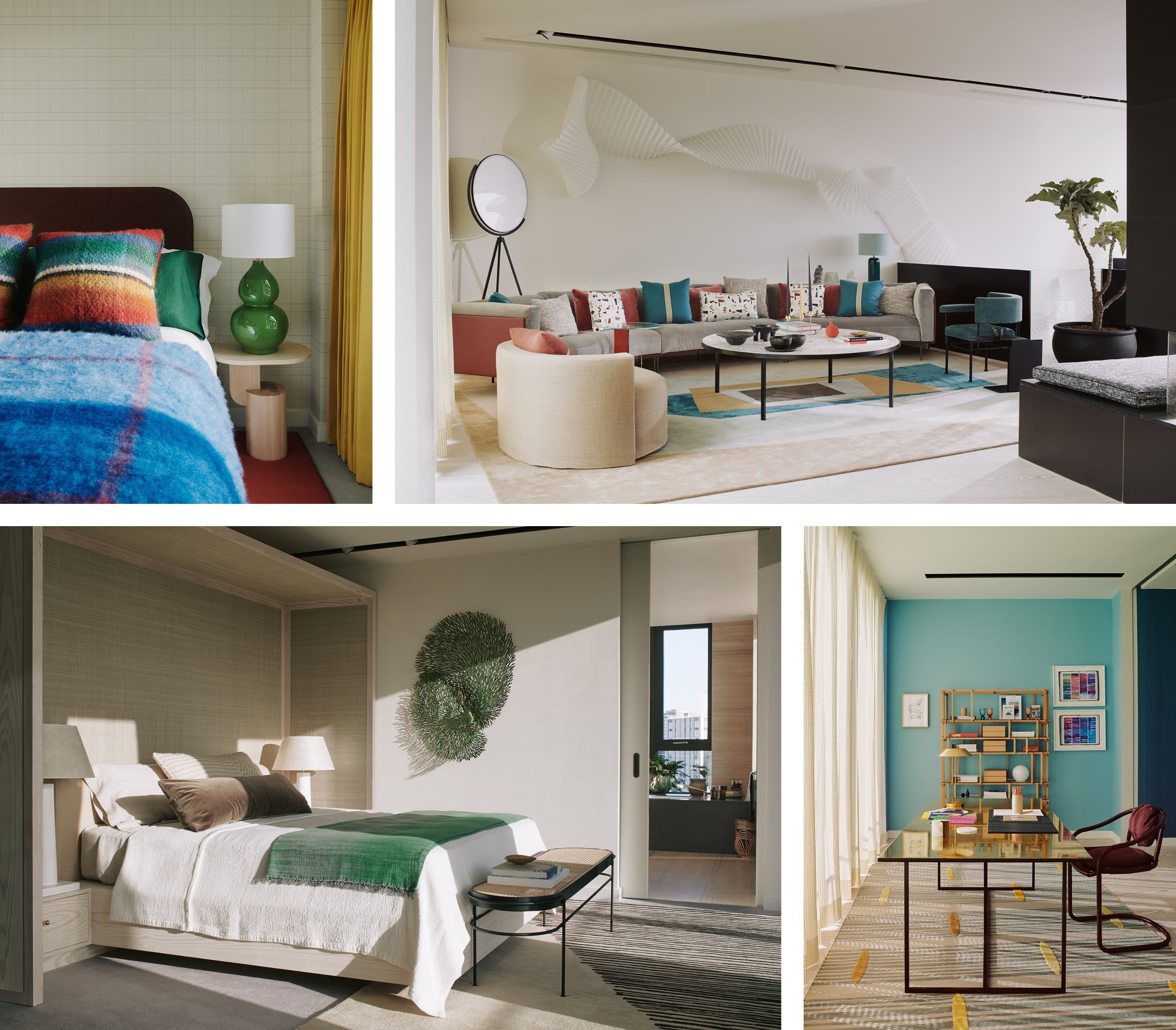 It is a post-war, playful and upbeat type of Modernism. 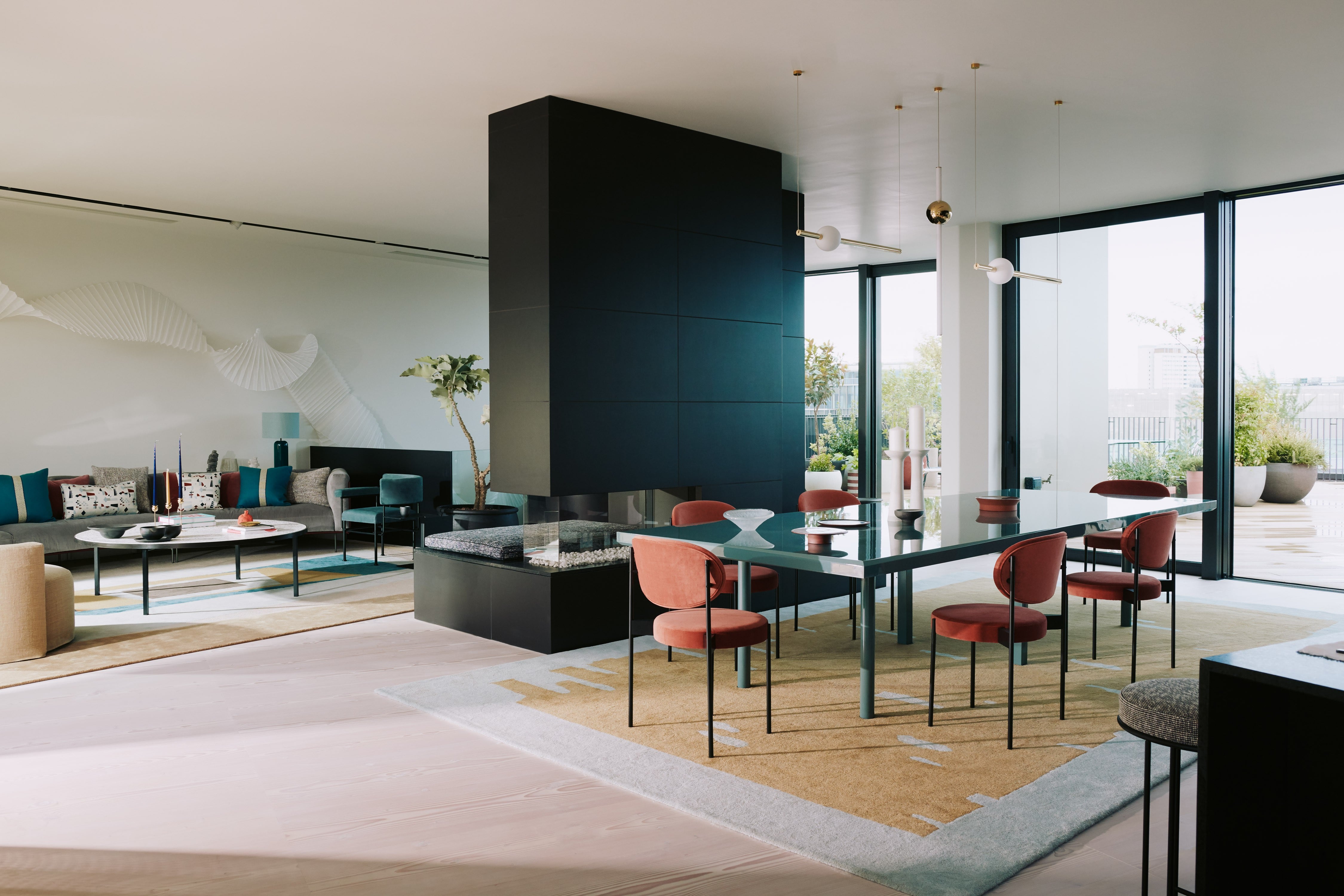 On the top floor, there are three reception rooms and a beautiful dark kitchen. You will also find a library and media room. The bedrooms are on the ground floor. The master bedroom is a quiet retreat with natural colours such as beige, brown and green. The bed with impressive headboard is the eye-catcher in the room. It is beautifully complemented by a 'Banca Iaia' bench by Gustavo Bittencourt and a custom designed carpet by Waldo Works made by Christopher Farr.

For almost 9 million euros (excluding furniture and art), this luxurious abode with a beautiful view of the London skyline can be yours. 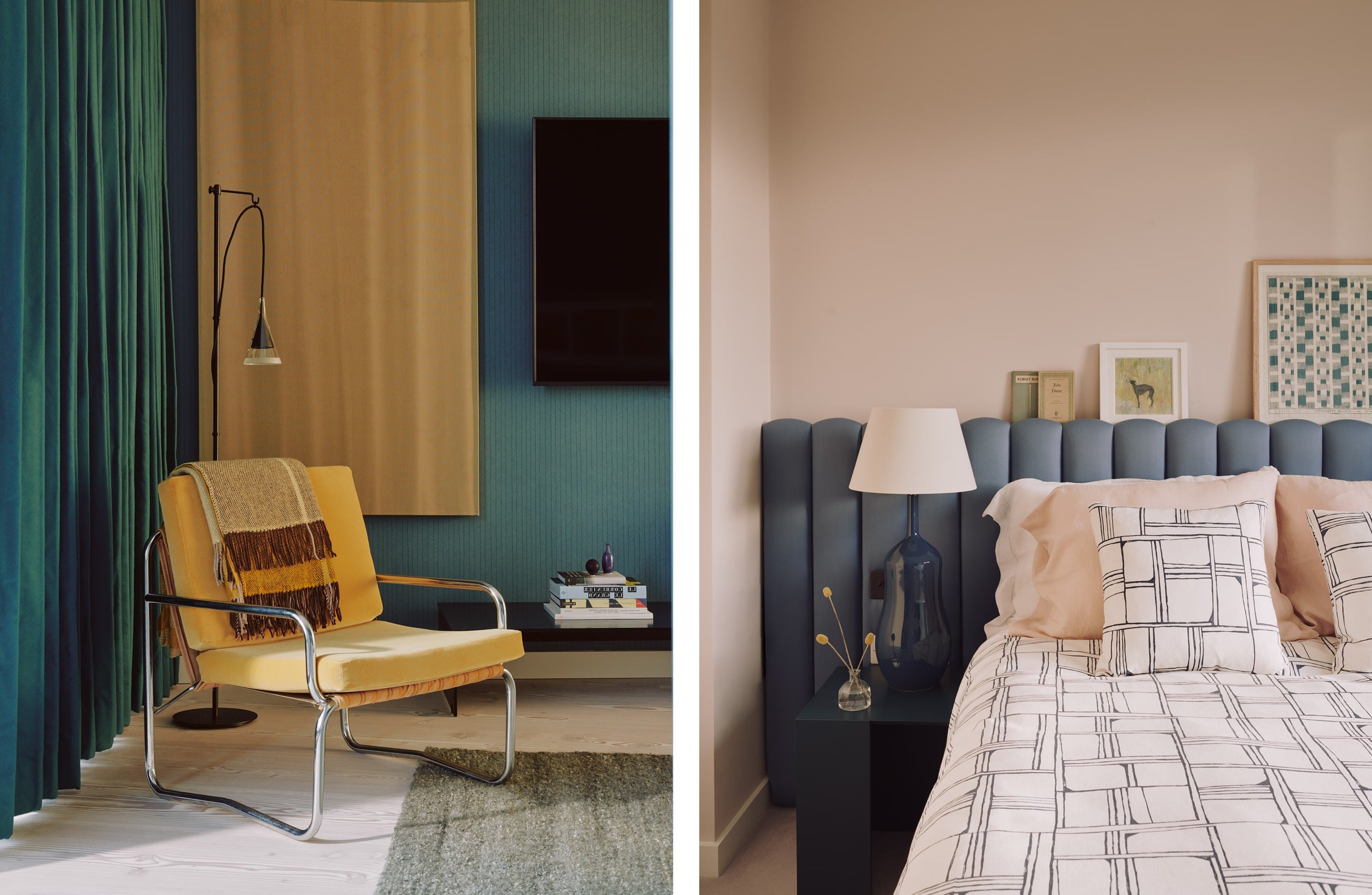 Book of the week: Dalí & Magritte