A frontal view of the sea also deserves the same type of open space on the inside. This became reality for Project LZ in het Zoute, thanks to the excellent design of De Maatwerker. They brought the apartment to a higher level and made sure that the renovation involved everything the property was asking for. The result is a home base that fully optimalises its surface. 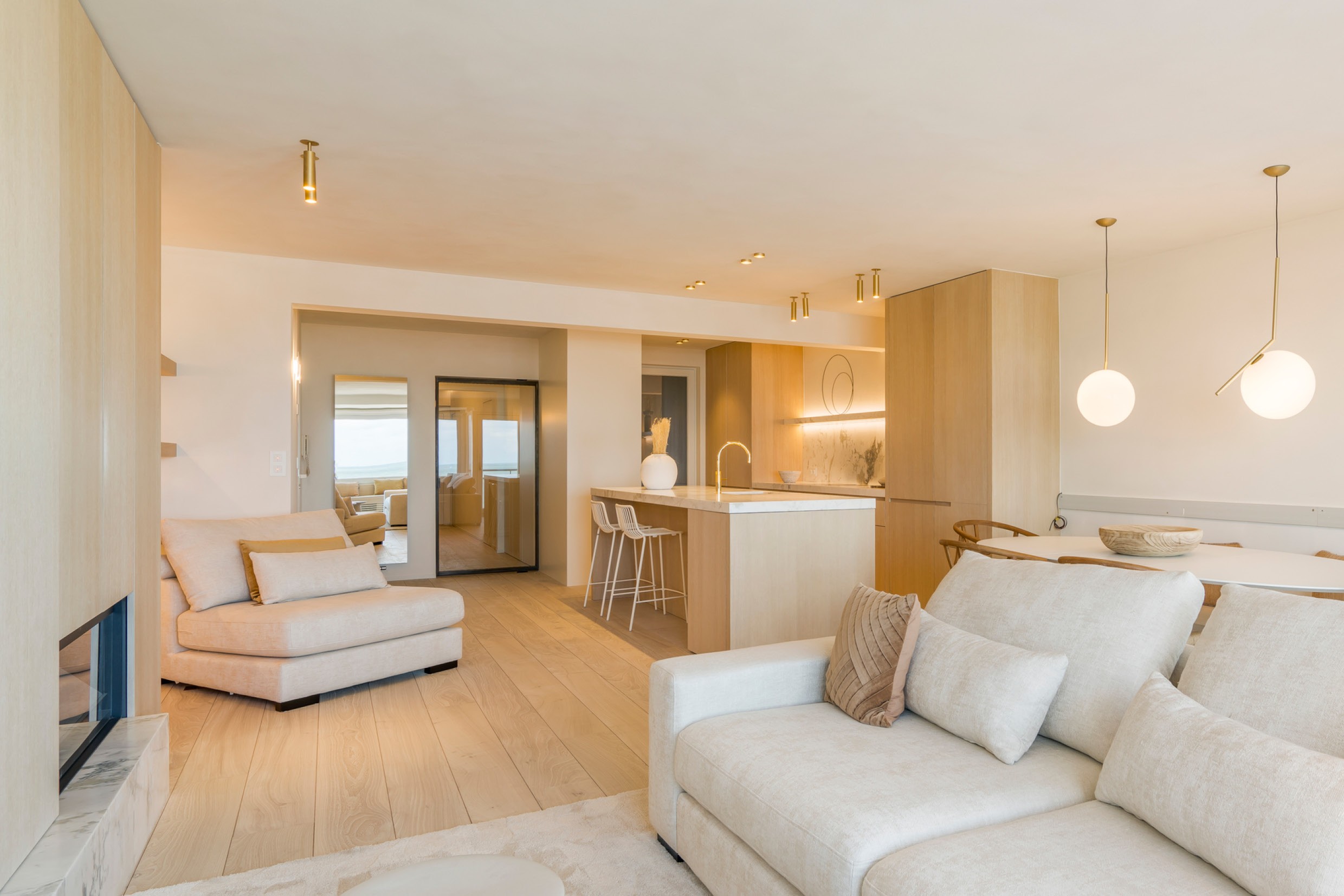 One of the ambitions of De Maatwerker in this project was to let the living area fulfill its greatest potential. The large open kitchen was essential for this: by uniting the cooking, eating, and relaxing in the same space, an organic whole originated where the different zones merge into each other. They paid a lot of attention to consistency and balance as well, among others in the form of a continuous base in natural stone that reaches up to the sofa at the window. For cosiness, the electrical fireplace can help creating the right atmosphere. The calm character that the entire apartment exudes is also the result of deciding to use an oak veneer. More specifically, the team chose a variant that is deeply brushed and bleached. The parquet of Woodstoxx was used in the same tint, because of which the whole becomes timeless. 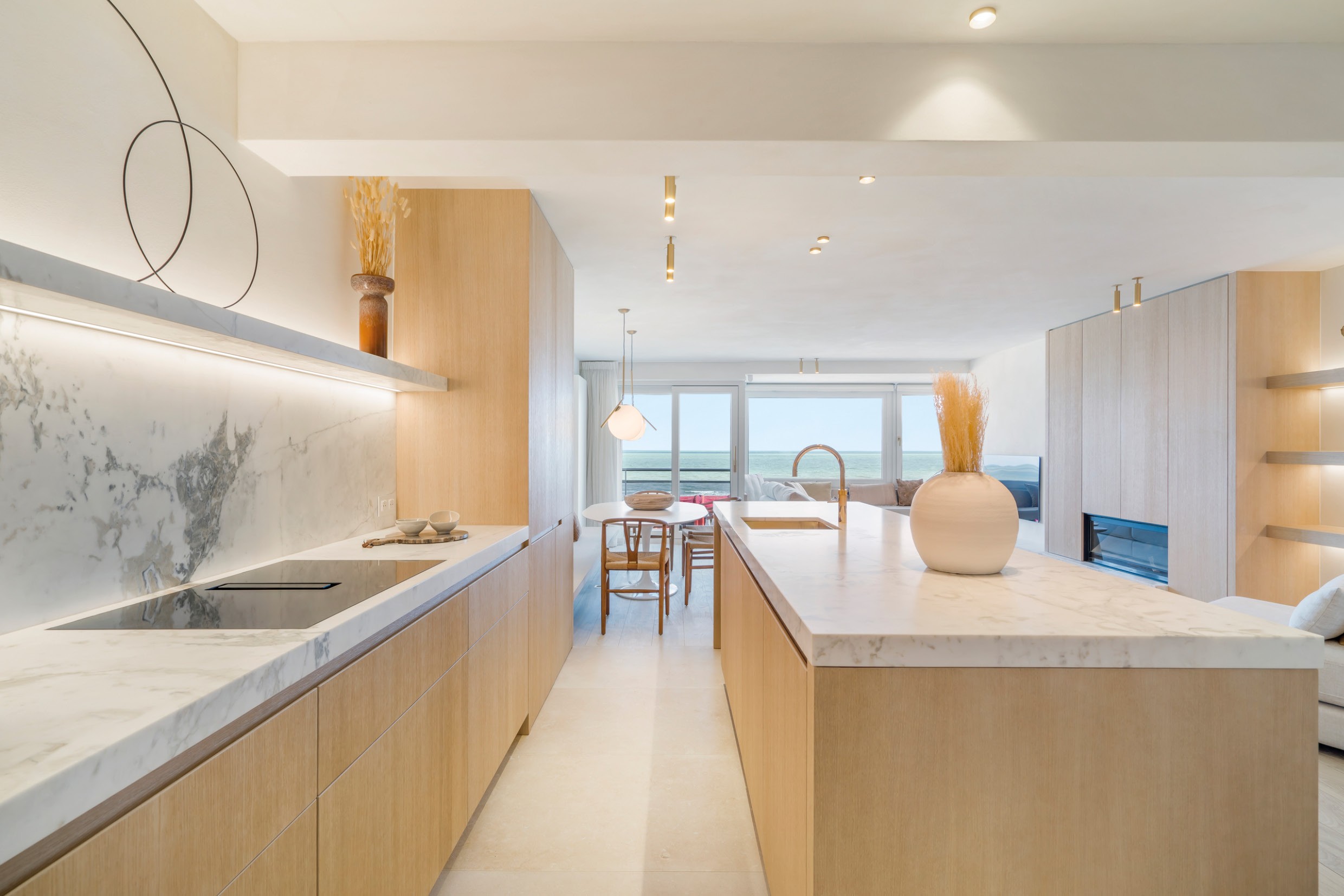 By determining the colour palette with mainly white, beige, and golden tints, the apartment looks larger and more open.

Other materials include white natural stone with a warm drawing and elements in brass, for example the tap, sink, and light fittings. This was continued in the bathroom, where they worked with Mortex as well. Here you can find, besides, both a bathtub and a shower. A lime technique was applied in other rooms as well, which immediately summons a homely feel. By incorporating such techniques, De Maatwerker succeeded in establishing an environment where the residents can feel completely at home. By determining the colour palette with mainly white, beige, and golden tints, the apartment also looks larger and more open. The spacious windows in the living area do not let you forget for a second that you are looking directly at sea: the ultimate finishing for a light-filled apartment like this. 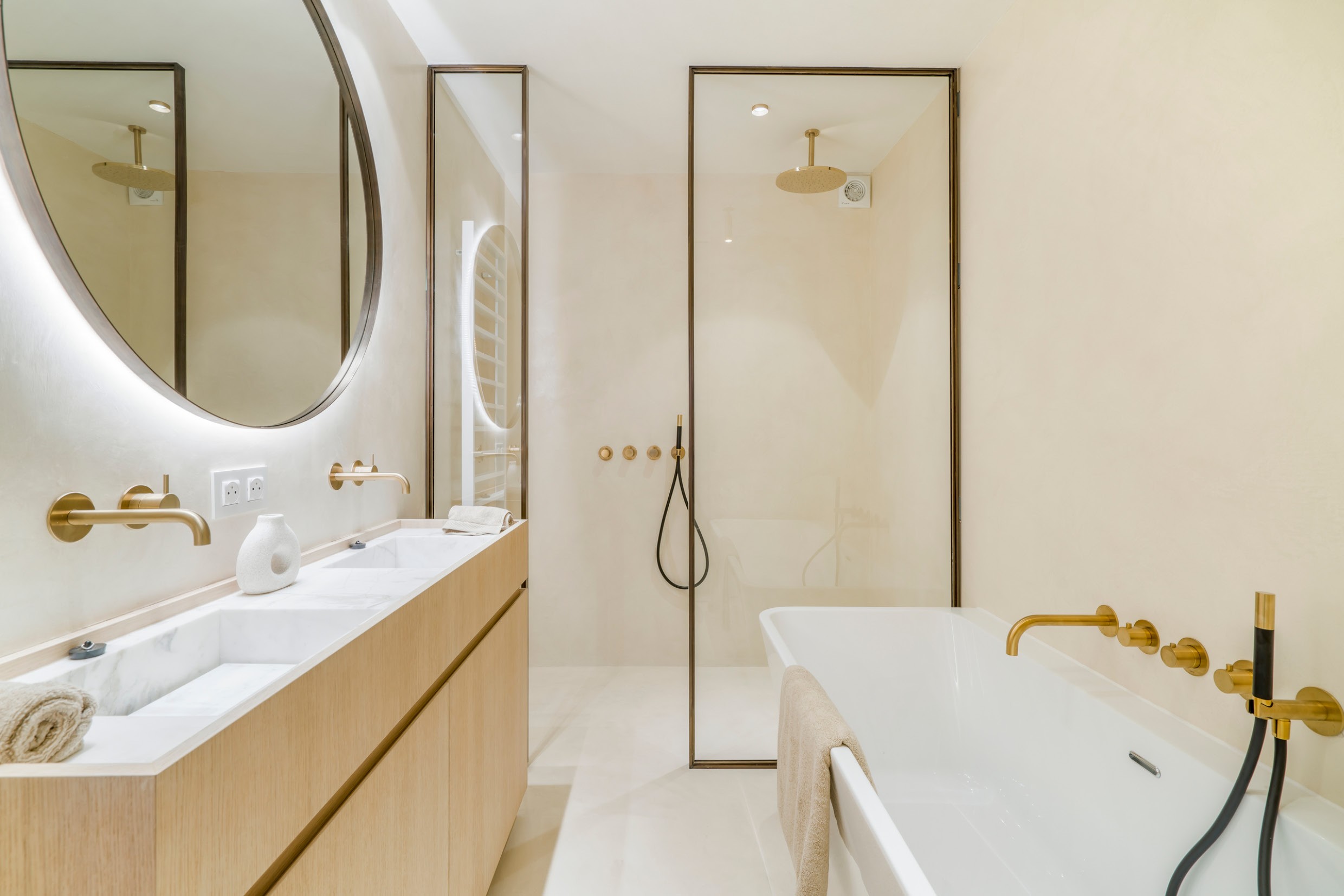 In this renovation in het Zoute, De Maatwerker gave the apartment everything it needed. By utilising the right materials and giving the details the utmost attention, they transformed a concept into an inviting home. We are curious in which their ambitious eye will result the next time.

De Maatwerker is a company in Knokke that specialises in interior, you guessed it, made-to-measure (De Maatwerker means ‘the custom worker’ in Dutch). Under the motto ‘The details are not the details, they make the design,’ they will carry out the most detailed and personal plans so that you have an interior that suits you perfectly, tailored to your personality.