The Valencia-based architecture firm mar plus ask was founded in 2015 by a Spanish-Danish architect duo in Berlin. In that city, they renovated a former supermarket into their home and office. High ceilings, a concrete polished floor and beautifully stucco-style rendered walls characterise the entire space. The duo now works from Valencia and Mallorca and sold the apartement a while ago, but the images remain inspiring.

In 2015, two architects, Spanish Mar Vicens and Danish Ask Anker Aistrup, decided to join forces and found architecture firm mar plus ask. The studio adopts a research-based approach, supported by their academic work and building experience with materials and construction. The values and aesthetics stem from the Scandinavian and Mediterranean origins of both architects. They want to create contemporary expressions and enjoyable spaces that can age graciously. Modest but with character. With each project, the office never loses sight of the historical and current context of the locations, and the environment – both its social and economic aspects – also plays a very important role. By now, mar plus ask works in Copenhagen, Berlin, Mallorca and Valencia. 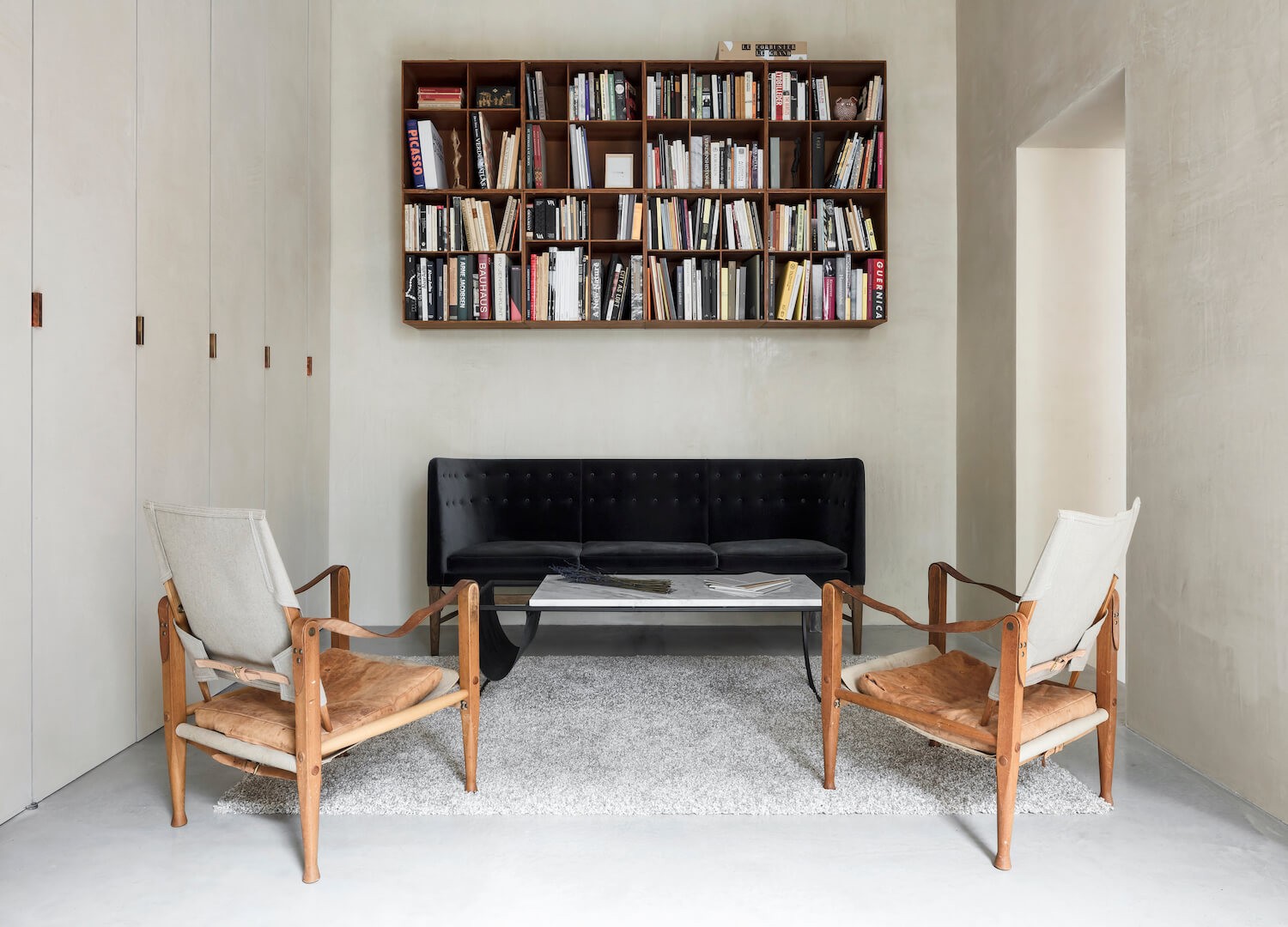 In Berlin, the architect duo took over a former supermarket and turned it into their own home and office. The ground floor dwelling is located in Glogauer Straße, the heart of Kreuzberg, a popular neighbourhood for students and artists, among others. The property needed to be completely renovated: new floors, ceilings, walls, partial removal of structural walls and a new electrical and water installation. The 180 squared meters ground floor is divided in two. The commercial space faces the street and the residence faces the courtyard.

The common thread throughout the house and studio are the high ceilings, the concrete polished floor with floor heating and the beautifully stucco-style rendered walls. All necessary elements were designed in such a way that they could be built in from wall to wall. For example, the doors and cupboard doors are frameless from floor to ceiling and plastered in the same stucco finish as the walls. This results in a very powerful geometric finish.

Modest but with character. 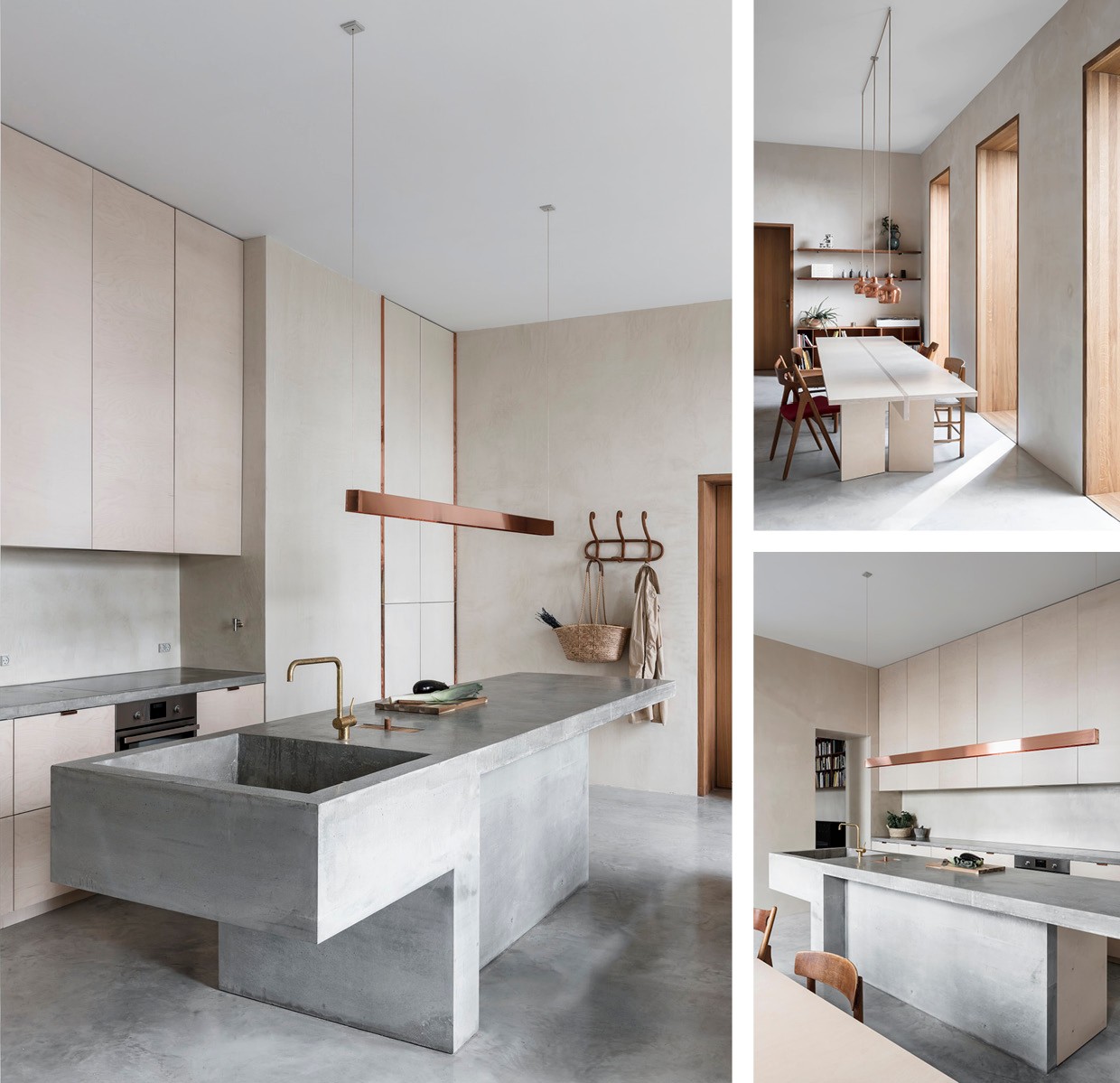 The small windows in their home have been replaced with tall oak windows, up to three metres high, which were made according to their own design in Denmark. The windows brighten up the house effortlessly and open it up to the small courtyard garden. The central area of their home is the kitchen. A 3,60-metre concrete island was cast directly on site with a beautiful terrazzo-like texture. Next to it is a three-metre-long wooden dining table that complements the kitchen island perfectly.

Between the kitchen-dining area and the living room there is a difference in height, which gives the living room its own place. This space is surrounded by a wall of closets, which go from edge to edge. They lead to the bedroom and bathroom. The bathroom is an austere space, built entirely in concrete. All elements are concealed, and the visible surfaces are in micro-cement. In the bedroom, an all-covering curtain visually simplifies the room to keep the atmosphere quiet and calm. 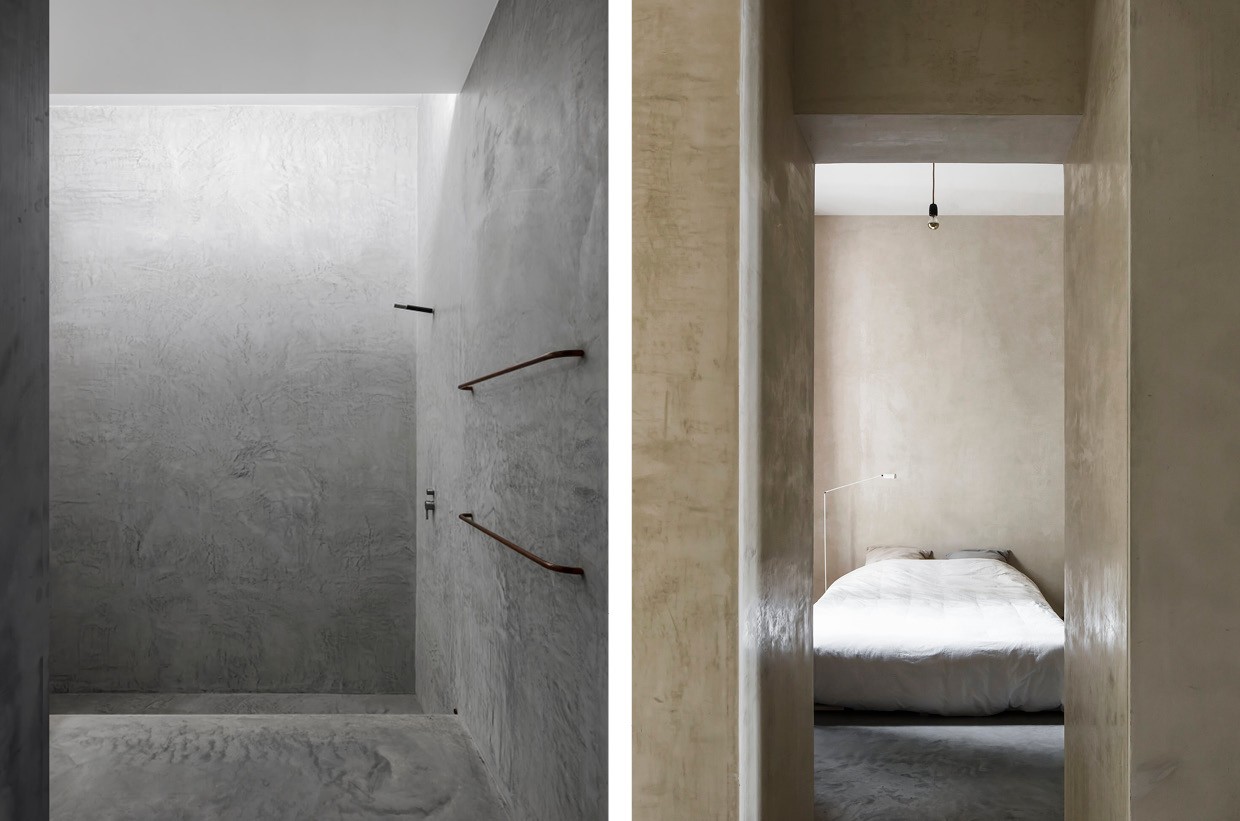 The commercial area is an open large room with a higher back area, closed with a full height panelled wall of doors. Behind it is the bathroom, kitchen and storage area. A new oak and glass door of their own design brightens up the room. The charming old wooden windows along the street side is the only element that has been preserved and restored.