A rough diamond in New York

Interior designer Jae Joo Designes and BAOO Studio together renovated a rough diamond in New York called BK Brownstone. Connecting the different rooms was their goal, so instead of closed doorways, they deliberately chose arched ones, which contributed to the serene look they wanted to convey with this project.

South Korean Jae Joo has an established studio in New York and a diverse creative background. Each of her projects is unique and based on the needs and desires of the client. Working with Barker Associates Architecture Office (BAOO) who focus on projects in both the public and private sector, was a perfect fit, as they both love to bring the old and new into harmony, of which this house is the perfect example. Together they renovated this 19th century building into a beautiful minimalist house with a muted colour palette and an underlying sense of grandeur.

Matte muted walls and ceilings emphasise the cosiness and connection between the spaces.

The project is located in a landmark neighbourhood in Fort Greene, Brooklyn. This hidden gem has an understated but undeniable creative essence thanks to the vibrant and strong African-American community there. ‘Part of the appeal of living in that neighbourhood is embracing and respecting the environment and the history,’ says Jao Joo. To emphasise the intended serene look, the interior designer chose white neutral walls to keep everything as minimal as possible, while the colour palette consists of beige and grey tones. The architects kept many original details intact, such as the matte, muted walls and ceilings. In addition, everything was painted from ceiling to plinth. This not only creates a cosy feeling but also connects the rooms. In the bathroom and kitchen, Joo chose decorative plaster for a rough finish. This adds warmth and an organic feel to the space without being overly dramatic. 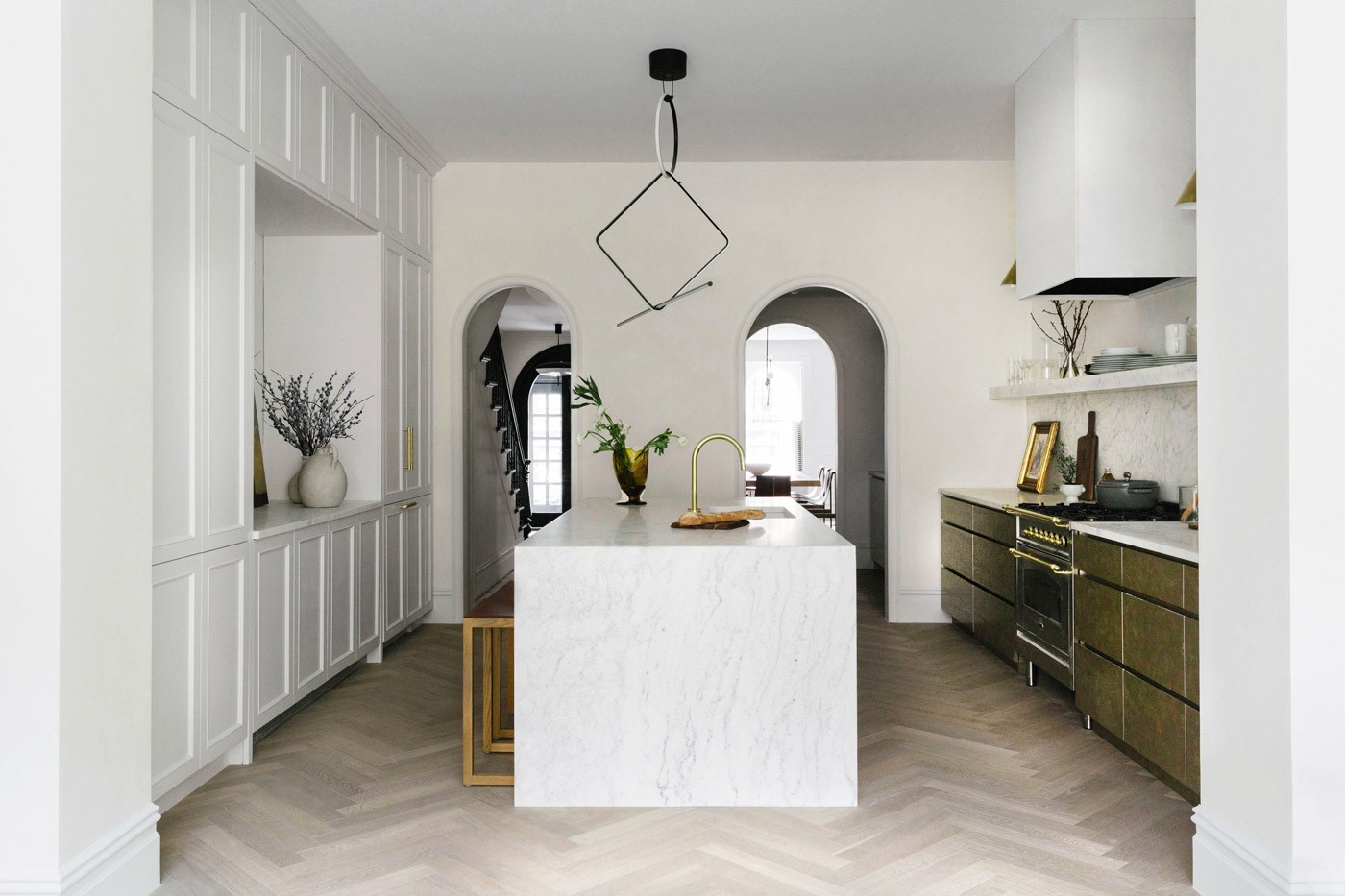 Vaulted doorways were the first thing the architect thought of for this design, bringing a lot of charm and personality to the space. In addition, the ceilings of the lounge were raised and a large fireplace was designed by Jao Joo, very picturesque and perfectly cosy. The opulent artwork next to the fireplace is by Matias Sanchez Martin, whose work is known for its abstraction and grotesque figuration.

The architects love to find a diamond in the rough that makes the house special. In this project, this was the marble fireplace and the beautifully curved staircase original to the house. These are the most beautiful architectural elements in the house. The result of the renovation is truly amazing and has completely transformed the space. Countless changes have been made, but the soul of the house is still intact. The creative energy that prevails in Brooklyn, which is so lively and unpretentious, clearly inspired the architects.