The intuitive work of Jordan Kasey

In the anonymity of her paintings, Jordan Kasey reflects psychological and mysterious scenes. They arouse complex feelings through their deep colours and almost terrifying atmosphere. Yet in between of all the mystery, they also feel very familiar. We talked to Kasey about her intuitive work.

In your paintings, you choose anonymous figures. Why is that?
“Rather than using expressive facial features to communicate emotion, I prefer to let whatever story I’m telling unravel through light, colour, space, and the overall rhythm. If I include a face in my paintings, it’s just one more tool to portray an internal moment. Sometimes I begin a painting with a face in it, but as the composition gets worked out over time it may get cropped out, and then I’ll think ‘Eh, I guess it didn’t really need it’. I like for the figures to be anonymous because to me they aren’t portraits of individuals. They are the idea of a person that forms a vehicle for telling a story through form.”

Lately, you’ve been giving your characters more personality, is that an evolution?
“I’ve always been interested in the idea of the figure dissolving into, or being a part of, its environment. As I’ve been exploring different sorts of light and space, the figures themselves adapt. Similarly, in the past few years I’ve been experimenting more with texture, which has inevitably led to different approaches to dealing with the figure.” 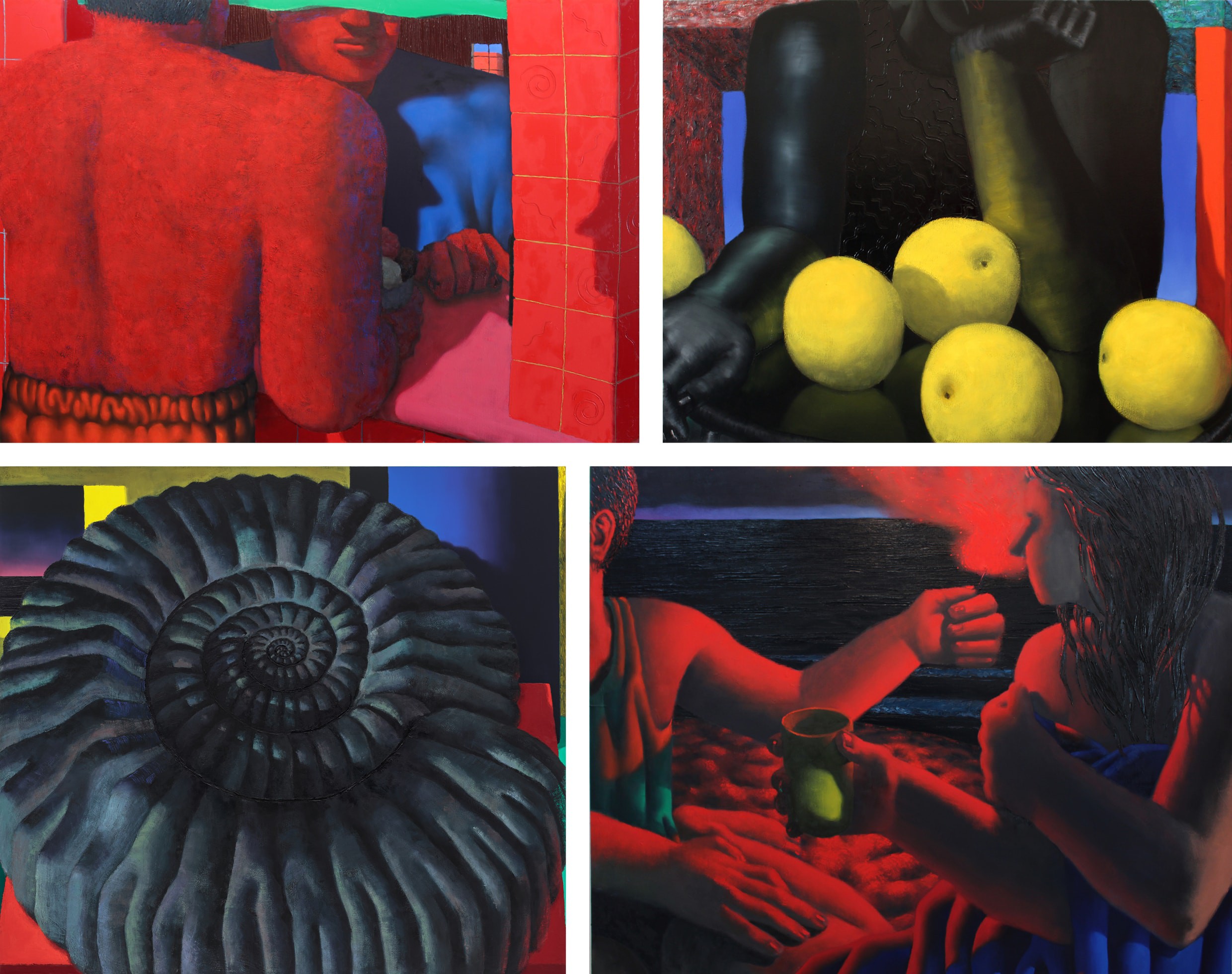 You once said you were worried about painting figures with an identity, why?
“Years ago, as I was transitioning from painting imagined landscapes to working with the figure, people didn’t just walk into the scene on the canvas. Rather, over the course of a few years, rock formations in the landscapes started to take on figure-like roles in the compositions until they evolved into these rock-like human forms. In earlier years, I was hesitant to add details such as hair, skin tone and clothing which would lend them an identity and contextualise them within a time period or culture, simply because that wasn’t what they were about to me. But this tendency was limiting, and it didn’t last. Clothing, variations in skin tone, albeit unrealistic or vague gender associations like long hair, have become vehicles for colour, texture, light and mood. For me it’s important that they feel just reliable enough to occupy a familiar space, while still remaining not-quite-human.”

You bring up psychological scenes in your paintings, why?
“It’s interesting for me to work with an image or ‘story’ that is more psychological than it is narrative, because I enjoy the challenge and process of finding a way to share such moments visually, in such an immediate way, as viewing a painting. I like for there to be a sense of mystery or tension in a painting once it’s done, even though I begin with an idea for a composition that’s quite simple. These images don’t serve the purpose of explaining anything or answering a specific question but acknowledge a disjointedness or dream-like quality in everyday life.”

Do they have any relation to occurrences in your life?
“In a way yes, because all any of us has to draw from are things we’ve seen and experienced in our lives. But they aren’t direct illustrations of events or memories.” 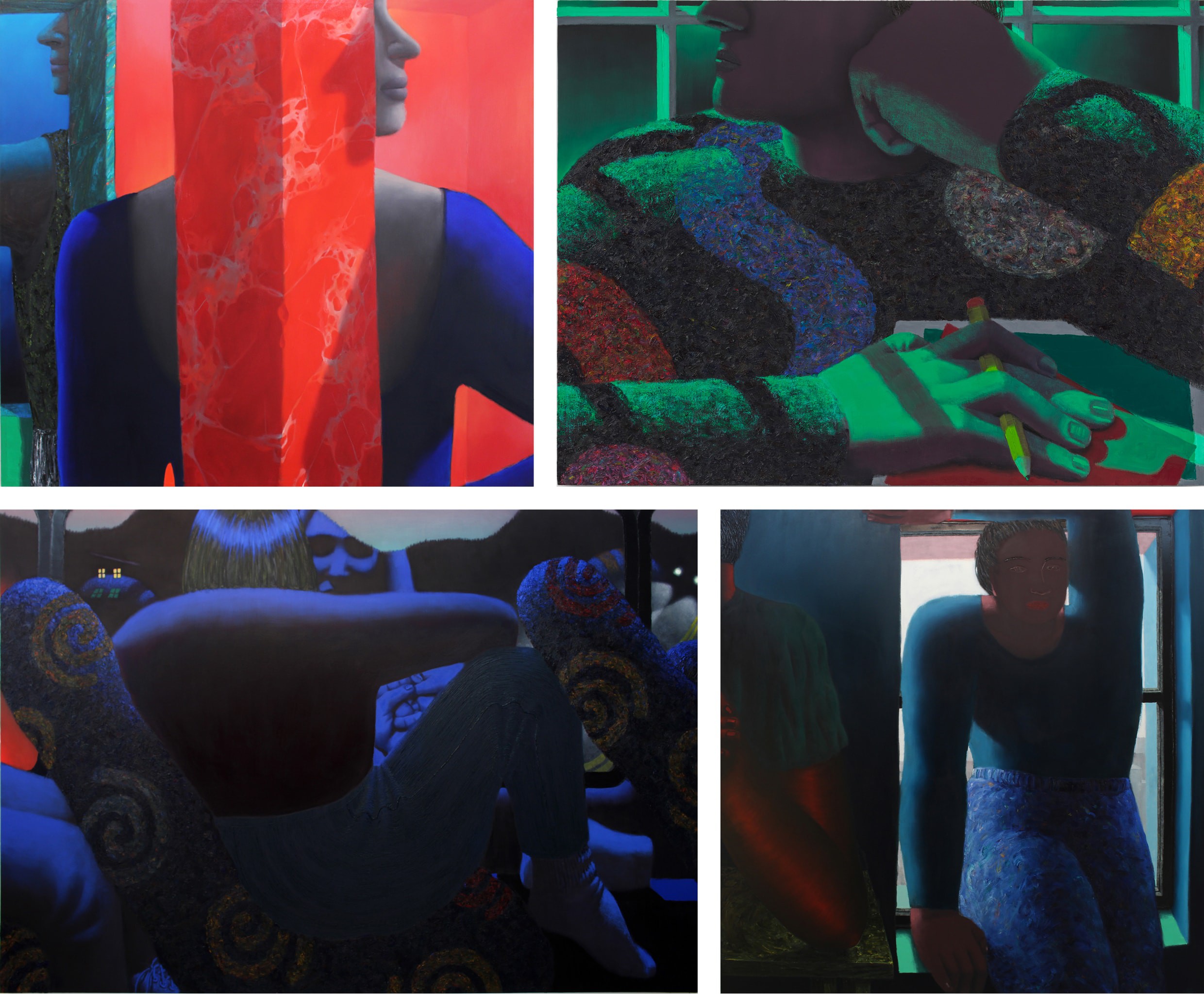 What feeling do you want people to get when they see your work?
“I hope that tensions, as between light versus dark, bright colours versus eerie atmospheres, familiar settings versus senses of mystery, etc, can lead to really complex feelings or reactions, and I like it when people can’t quite explain or put their finger on what it is they like or feel about my work.”

I’m really excited about what I’m working on and excited to see where it will lead me.

What can you tell me about the use of colour in your paintings?
“I love bright colours, they are fun for me to work with, and I use colour pretty intuitively. I often change the colours around a lot while working on a painting until it feels right.”

What inspires you to make a painting?
“I just get ideas of paintings to make, and they often undergo a lot of changes while I’m working on them, and something that is like a story to me develops through that process. For Ice Cream, I wanted an image of two people facing each other across a counter as if they were looking through a mirror. Then I got the idea to also have two shadows in profile encountering each other. Because both figures’ faces are obscured, the shadow faces, even if they aren’t theirs, take their place. There’s a red figure and a blue figure, and there’s a red shadow face and a blue shadow face. To me that’s the story – two, sort of silly parallel confrontations. The ice cream came in at the last minute, partly to justify the removal of the red figure’s shirt by confirming the element of heat. When I began the painting, he had a sweater, but at that time I was working on two paintings of figures in red sweaters with their backs to me and it felt kind of weird. Also, summer arrived. It gets superhot in my studio, so the sweater had to go. I tucked the ice cream into a shadow where it could stay cool. It felt like the missing link to some puzzle.”

Do the results ever surprise you?
“Always. Little failures, re-working, mistakes and experimentation lead to unexpected results. If I didn’t surprise myself in the process of making a painting and didn’t feel like it had taken on a life of its own, it would feel really boring and thus unsuccessful to me. I love feeling like ‘I didn’t know it would be that!’.”

The hands in your paintings are very expressive, why?
“Having expressive, naturalistic hands and feet can make the figures feel engaged and grounded in their environment. The figures aren’t anatomically correct, but the realism in the hands and feet implies a tactile experience that the viewer can relate to. Also, because the faces are often cropped out or minimally expressive, I’m interested in how the gesture of the hands can reveal emotion instead. I sketch my own hands and feet for general reference.”

What can we still expect from you?
“My next solo exhibition will be with Nicelle Beauchene Gallery in 2021. Otherwise, I foresee myself continuing to paint. I’m really excited about what I’m working on and excited to see where it will lead me.”

This interview was originally published in Imagicasa Art 2019. You can still order this issue through our webshop to read more inspiring stories about art in all its shapes and styles.

Images: Courtesy of the artist

In between of all the mystery, the works also feel very familiar