At the age of sixteen, the Belgian artist Mermic already sold his first work. Still, he decided to try out a ‘safer’ career path first and he worked for a large multinational for several years. However, the art virus continued to affect him and now, some twenty years later, he is also achieving worldwide success with his own creative designs.

Mermic (real name: Michel Mertens, 1982°) tells us: "As long as I can remember, I've been trying to create art all my life.” His mother is also a painter, just like his grandfather. From a very young age, he got to spend a lot of time in their studios and this is where Mermic was taught the tricks of the trade. However, at his father's suggestion and following his example, the artist first chose a 'safer' professional occupation. He obtained his diploma in Economics at the university and also developed a passion for the financial world. For more than eight years, Mermic worked for a large multinational. Being responsible for CRM and experimental marketing, he travelled the world and had the opportunity to meet a lot of interesting people. Yet he knew that one day he would give up that job and make his dream of becoming an artist come true. These are by no means lost years, he tells us: "As far as I'm concerned, this former experience has ultimately been an important phase in order to manage my business in a correct way today and to be able to live off my art. I've been so lucky that for me all the pieces of the puzzle have ended up in the right place." 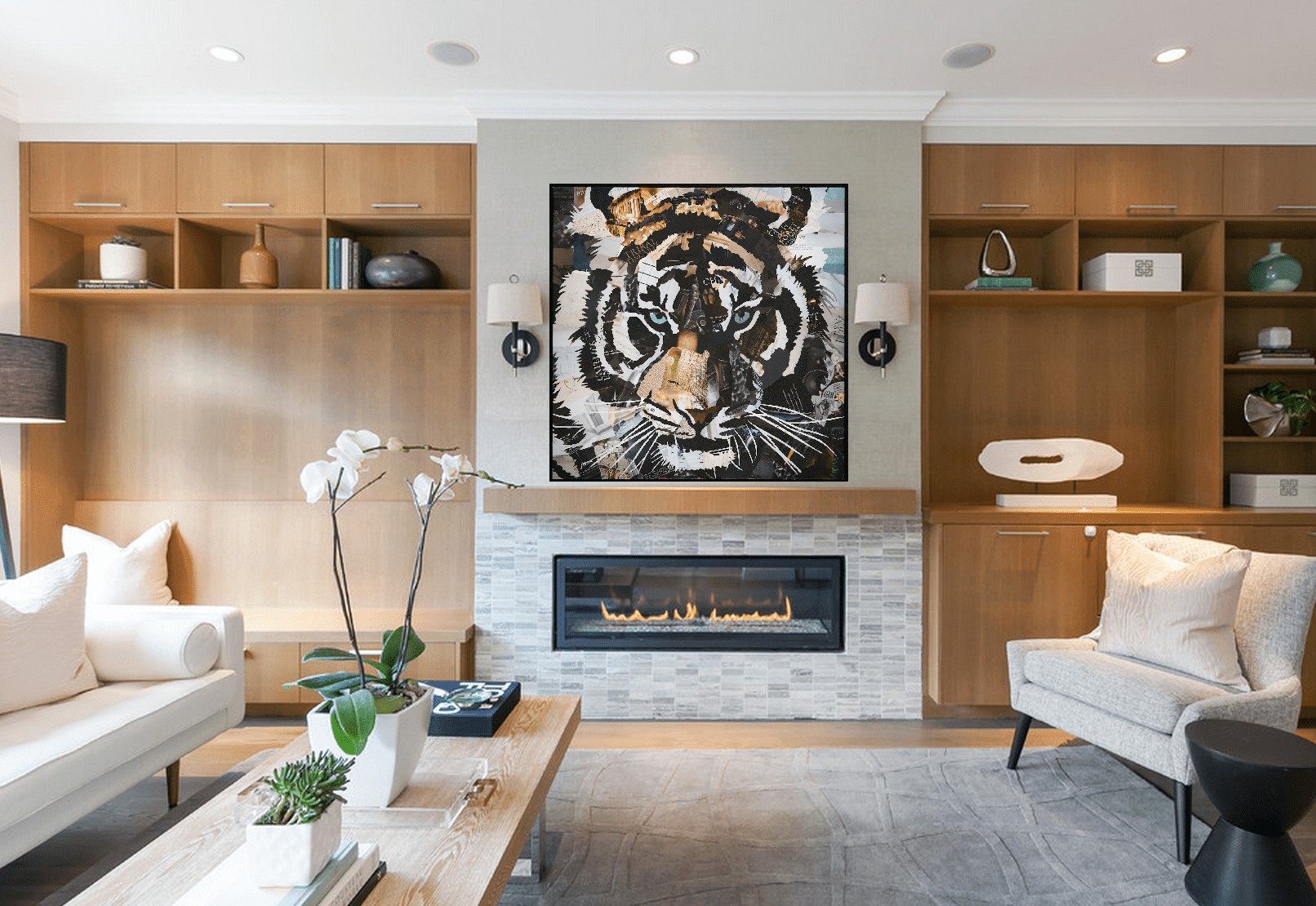 Recycling art
The way in which Mermic approaches artistry is in itself a unique factor that plays a major role in his success. Of course, the works themselves are the most important thing. Here, too, some puzzling was needed to arrive at the specific technique and style of the works we see here. The technique that Mermic developed about four years ago, fits in with the current general concern for our planet. "If you know what kind of chemicals are sometimes used to obtain certain paint colours, my choice was quickly made to develop an idea of recycling art.” And so, Mermic makes collages out of pieces of paper that he cuts out of magazines. It is a very labour-intensive process that can take up to two or three weeks to create a piece of 100 by 100 cm.

The artist expresses 'generational emotions' in his work.

The artist always starts by applying a few pencil lines to a white canvas which he uses as a point of reference during the creation process. With hundreds of pieces of paper, he always tries to find the right shades of colour and to realise the right perspectives. When he has achieved the desired result, several protective layers are applied. These ensure that the work won’t fade in colour and is also water-resistant. "Of course, it would be much easier and faster to paint, but then I would have the feeling of falling back into something trivial," Mermic admits. This shows once again the sustainable thought behind his creations. He wants to take the time to create something that is permanent, that will survive the test of time.

The subject of a work is always a 'generational emotion', as Mermic calls it. They are figures who mean something to his generation, who evoke an emotion in the viewer. The works are therefore highly topical in various respects and we are of course a fan when an artist keeps art relevant in such a unique way.

Imagicasa spoke with Mermic about being an artist and what he still wants to achieve with his work. 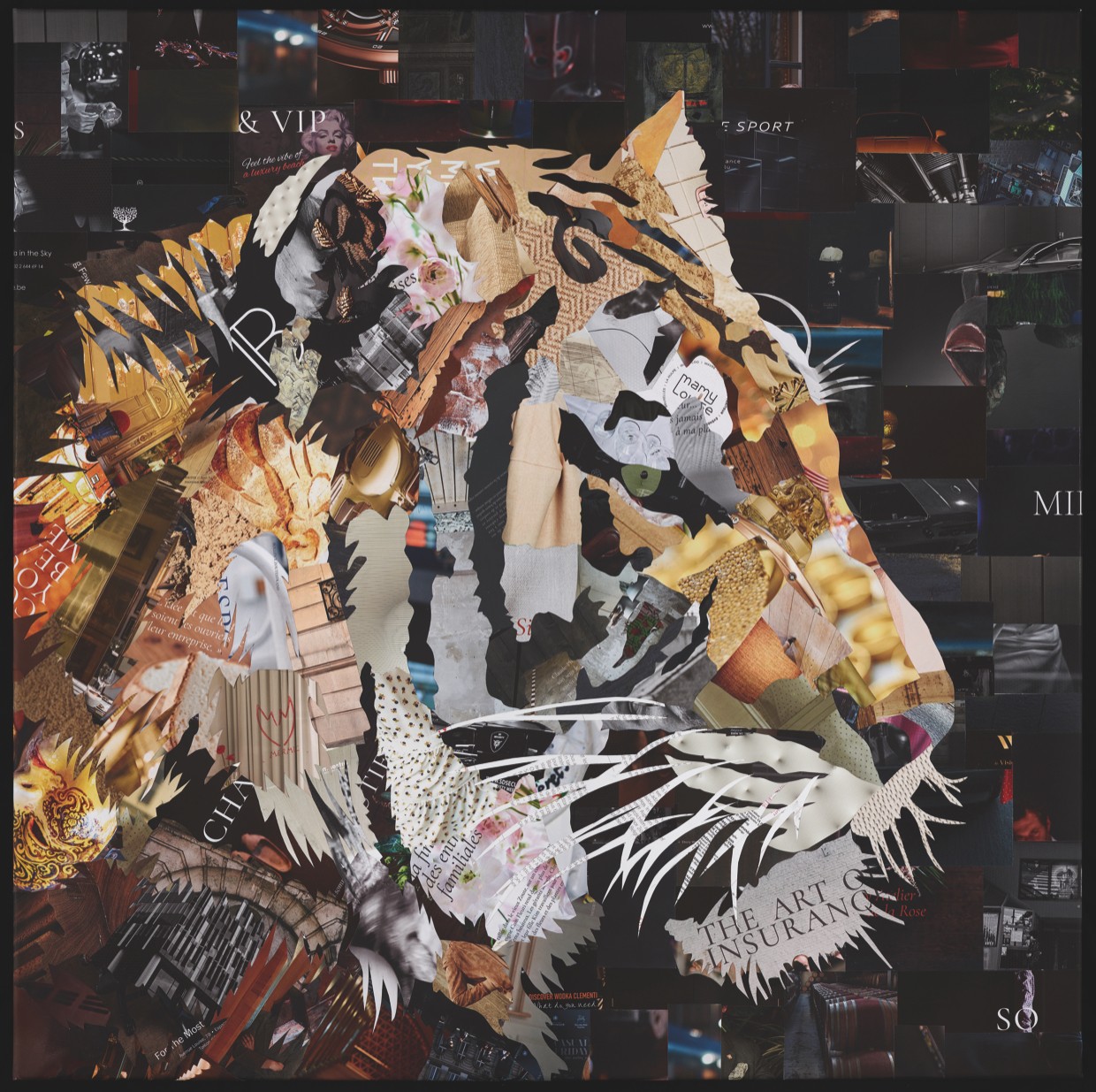 When did you know the right time had come to make this your profession?
“In fact, I have always known that I am an artist, but the step from 'my passion is making art' to the status of 'I am a full-time artist, period' was quite an important tipping point. For me it happened in a natural way, though; at a certain moment I just felt that I was ready to do it. I had compiled sufficient luggage, I had developed a unique technique of my own, my family supported me... these are all important factors to be able to achieve a certain level of success.”

By 'sufficient luggage' you probably mean your knowledge of the financial sector?
“Creating art is one thing, but art is so much more than just a decorative or luxury product. In addition to the attraction of wanting to add a piece to your interior, works of art are also products to invest in. A good knowledge of marketing and the financial markets is certainly not to be overrated if you want your art making business to evolve and expand. So, the advice I would give to other young creators is to think further than just artistic knowledge. Your skills and interests need to go much further than that.” 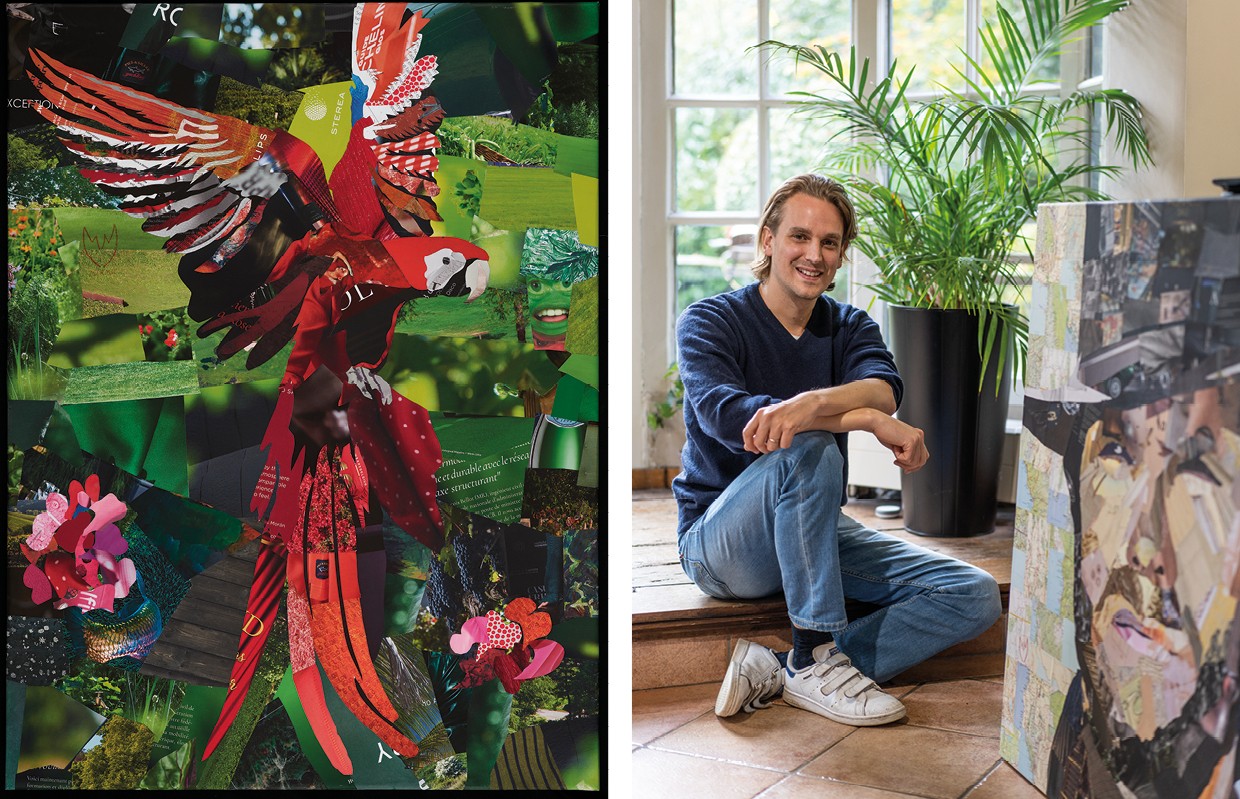 You make collages from magazine clippings. Why do you prefer this technique to painting, sculpting or something like that?
“My current technique has been years in the making. I wanted to come up with a concept that fits in with the current concerns of our society. In addition, I think it's important that people see the work that went into making it; if you stand in front of one of my works, you'll soon realise that I didn't create it in a few hours, but that it took a lot of workdays. For me, this is part of the ever-increasing transparency that our society in general demands today. My technique also ensures that every work is truly unique. I myself cannot make two identical works as I will never have the same material. In the end this turns out to be a huge added bonus, especially when you know that there is a big problem today with paintings that are perfectly copied in about a thousand specialized studios in Asia. I have come across gallery owners who therefore refuse to work with painters today. So fortunately, I don't have this problem, they are 100% collages and I use no paint at all.”

“All the pieces of the puzzle have ended up in the right place.”

How would you describe your style?
“I would say that it can best be defined as a contemporary form of pop art. Just like a hybrid car, I have adapted to the new standards. A few months ago, I received a fantastic compliment from the director of the Andy Warhol Museum in New York. He sees my work as a perfect follow-up to Warhol's work, namely a very unique and personal technique and themes that are an extension of the New York artist.”

In addition to the original collages, you also offer your work as a limited edition. Why do you do that?
“I do this for various reasons, the first of which is the marketing behind it. If the work exists visually about ten times, this will automatically lead to greater awareness of the work. Thanks to the limited editions, I can also do a favour for an audience that may not yet have the means for an original piece but that still wants to hang a nice work of art in their interior. To be able to achieve this, an original work is sent to a special photo studio that shoots the work in very high resolution. The limited editions are usually on dibond and limited to a maximum of ten pieces. These are of course numbered and singed by me.” 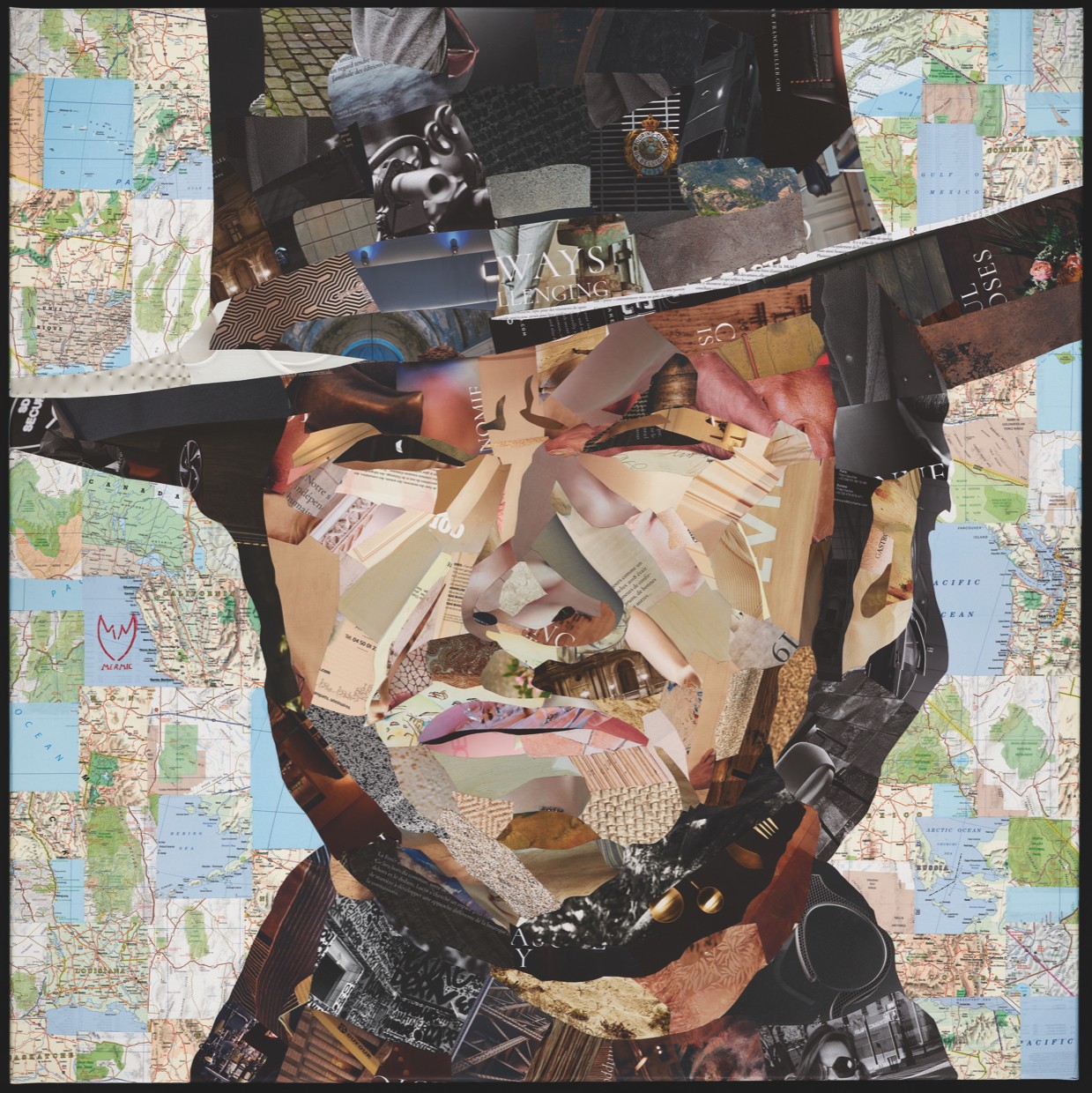 What does the international success (Art Week New York and Art Miami) mean to you?
“A lot, of course. The fact that I was noticed very quickly in the US with my new technique gave me the energy and the will to continue this great challenge. I was able to sell one of my first works to one of the members of the Beach Boys. It gives you a great feeling to know that one of your own creations hangs in a beautiful house in Beverly Hills. Getting the recognition of important people from the art world in New York is obviously a dream. When, thanks to them, I was able to show my works on 140 digital screens across Manhattan to the world during the art weeks in the Big Apple, I would have to squeeze my arm every now and then to make sure that it was real.”

Mermic is an artist of whom we will certainly hear a lot more. He is therefore already working on some new ideas and on the development of new techniques that have the same underlying sustainable philosophy. He wants to keep them to himself for a while though. "The potential of what I'm doing today is still enormous," he says. Mermic regularly produces collages on request according to his recycling technique and he hopes to be able to introduce many more people to these works. We are therefore all too happy to be able to put them in the spotlight here.

This interview was originally published in Imagicasa Art 2019. You can still order this issue through our webshop.